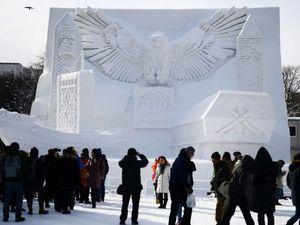 Japan deployed the military on Thursday to help residents trapped by record snowfall that has blanketed parts of the country, with 10,000 homes losing power in the north and west.

Prime Minister Yoshihide Suga called an emergency cabinet meeting and urged the public to be cautious, as local media reported more than 1,000 cars were stranded on an expressway connecting Tokyo to Niigata in the north.

Over 72 hours, a record 2.17 metres (7.12 feet) of snow fell in Minakami, Gunma prefecture, reports said, while Yuzawa in Niigata prefecture -- famous for skiing -- got a record 1.8 metres of snow on Thursday morning.

Tsuyoshi Watanabe, a Niigata disaster management official, told AFP he had asked for soldiers to help around 460 vehicles stranded on a highway.

"We are trying our best to rescue drivers and passengers... we are ready to continue our operation through the night," he said.

He said a dozen people had been injured in snow-related accidents in Niigata in the last two days.

Japan's Meteorological Agency said the storm was forecast to weaken temporarily but more snow was expected for the region over the weekend.

The cold snap comes as Japan battles a spike in coronavirus cases, even though it has had a relatively small outbreak overall and has avoided imposing strict lockdown measures.

The third wave of infections prompted Suga to urge people to avoid travel and has forced the first-ever cancellation of the Sapporo Snow Festival, whose intricate ice sculptures draw thousands every year.