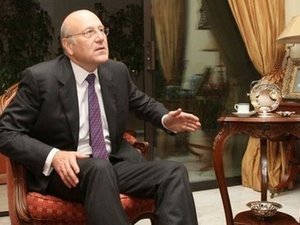 A dispute between President Michel Suleiman and Free Patriotic Movement leader Michel Aoun over the distribution of Cabinet posts may delay the formation of a new government.

Al-Akhbar newspaper, which is close to the Hizbullah-led March 8 camp, on Monday quoted well-informed sources as saying that government formation hit a snag after a "conflict" broke out between Suleiman and Aoun over the interior ministry portfolio.

The sources said that while Aoun is demanding to have the interior ministry, Suleiman insists this post must be reserved exclusively for him.

Meanwhile, they said the name of former Cabinet minister Yacoub Sarra is suggested for the defense ministry post as part of Aoun's quota.

It quoted sources as saying that the atmosphere was "positive," and that talks focused on the distribution of portfolios.

FPM sources, however, were surprised by statements attributed to Miqati in an interview with Al-Hayat published Sunday, saying that he had asked the former army general to provide him with names and qualifications so that the premier-designate can choose the right person for the job.

They accused Miqati of trying to give Suleiman a "large part of the losing team's quota," a reference to the March 14 coalition which has lost its majority status after Druze leader and former March 14 ally Walid Jumblat sided with March 8, giving the former Opposition alliance a majority of seats in parliament.

Suleiman appointed Miqati on Jan. 25 as Lebanon's new prime minister designate after he won 68 of the 128-seat parliament in the two-day consultations for the premiership.

Speaker Nabih Berri, on the other hand, made a rather optimistic statement, saying the new government is likely to be formed within a week.

An-Nahar newspaper, meanwhile, said Miqati and Suleiman held talks late Sunday at the presidential palace away from the media spotlight. Discussions focused on the process of government formation.

For its part, pan-Arab daily Al-Hayat said Miqati will sift through candidates after mulling over March 14 coalition's stance to be conveyed to him by Phalange party leader Amin Gemayel in the coming hours.

Regarding March 14's participation in the new government, As-Safir newspaper quoted sources close to Miqati as saying that contacts are underway between Miqati and March 14 leaders in this regard.

The sources said the mere continuation of contacts is an indication that March 14 has a desire to join the new government, adding that "there is a real chance that they participate."