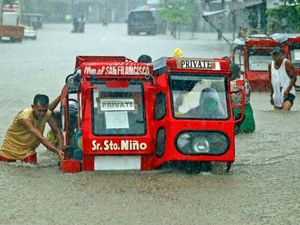 At least two people were killed and hundreds forced to flee their inundated homes in the Philippines as torrential rain triggered flooding and landslides in the storm-battered archipelago, officials said Saturday.

Huge waves smashed into a coastal village on Lapu-Lapu island in the central province of Cebu on Friday night, wiping out dozens of houses and leaving around 290 people homeless, Mayor Junard Chan said on Facebook.

Photos posted online by the mayor showed piles of wood and bamboo near the few houses still standing after the region was drenched by heavy rain.

Rescuers retrieved the bodies of two elderly women who were killed when a landslide hit an area of Mahaplag town before dawn in the nearby province of Leyte, police officer Racquel Hernandez said.

A boy was also pulled from the rubble of his home and treated for his injuries, Hernandez told AFP.

About 1,500 people were forced to leave their homes on the major southern island of Mindanao as floodwaters engulfed 13 villages, the National Disaster Risk Reduction and Management Council said.

The Philippines is hit by an average of 20 storms and typhoons every year, which typically wipe out harvests, homes and infrastructure in already impoverished areas.

The latest storm comes after a succession of typhoons in recent months pummelled the country, taking the lives 148 people, destroying hundreds of thousands of houses, wrecking cash crops and leaving swathes of the country without power.