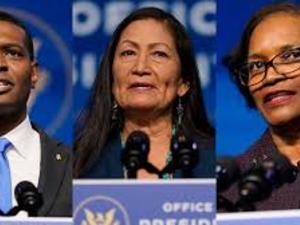 U.S. President-elect Joe Biden has introduced key members of his environmental team and said his administration would make the fight against global warming a pillar of his drive to rebuild the pandemic-hit U.S. economy.

Biden said these nominees will "lead my Administration's ambitious plan to address an existential threat of our time -- climate change."

"Folks, we're in a crisis," Biden said at the event in Wilmington, Delaware. "Just like we need to be a unified nation to respond to Covid-19, we need a unified national response to climate change."

The nominees introduced Saturday include Representative Deb Haaland of New Mexico to be Interior Secretary.

Overseeing America's natural resources that include national parks and wildlife refuges, if confirmed by the Senate, Haaland would be the first Native American to hold a Cabinet position.

Biden said his administration will work to modernize water, transportation and energy infrastructure to make it better equipped to resist extreme weather conditions -- and create many jobs along the way.

He also said his administration will create a quarter million jobs "right away" by hiring people to plug millions of abandoned oil and gas wells that are deemed a health and safety risk.

Biden repeated that he will rejoin the Paris climate accord, which President Donald Trump abandoned, and restore a slew of Obama-era environmental regulations that Trump eliminated.

Regan and Mallory are Black. Biden said that with Saturday's announcements, his Cabinet will feature six African Americans.