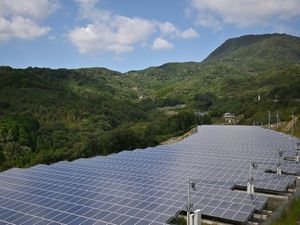 Japan needs to boost renewable energy by reforming outdated policies on land use and the national grid if it is to meet a new goal of carbon neutrality by 2050, industry players and experts say.

But the world's third-largest economy has a lot of catching up to do, said Ken Isono, CEO of renewable energy company Shizen Energy.

"Japan could be a leading country in solar, 15 years ago it used to be," he told AFP.

"But I think Japan lacked vision and so it got totally left behind."

Critics have long bemoaned a lack of ambition in Japan's policy, which currently aims for 22-24 percent of the country's energy to come from renewables by 2030.

Around 17 percent already came from renewables in 2017, and a combination of growth in the sector and a pandemic-related fall in demand means Japan is on track to meet its 2030 target this year.

Japan was the sixth-biggest contributor to global greenhouse emissions in 2017, according to the International Energy Agency. It relies heavily on coal and liquefied natural gas, particularly with many of its nuclear reactors still offline after the 2011 Fukushima accident.

Isono, whose firm works in solar, wind and hydroelectric, thinks the government should set a goal of "at least 40 percent" renewable energy by 2030, which he calls realistic rather than visionary.

But getting there will require concrete action, particularly on land use, he argued.

Japan is sometimes assumed to struggle with renewables because its mountainous territory is ill-suited for solar and wind installation.

But Isono said that is "an excuse", pointing to the country's comparatively abundant abandoned and underutilized farmland.

"The average age of most farmers in Japan is almost 70 years old. In five or 10 years, nobody is going to be doing agriculture... How can we create energy from that land?" he said.

Isono favors legal reforms to make it easier for municipalities to take over such land and use it for renewable energy projects, an idea backed by others in the sector and some in government.

Freeing up farmland would mostly benefit solar, which dominates Japan's renewable sector because panels are comparatively easy to install and maintain, and offer flexibility in terms of project size.

But there are also some specific factors holding back other options, including wind power, according to Mika Ohbayashi, director of the Renewable Energy Institute, a think tank in Tokyo.

Wind projects are more efficient the larger they are, but securing grid access for significant output is a challenge, because Japan's existing utilities dominate and "have restricted access to decentralized renewables such as wind power", she said.

And there are other barriers: wind projects generating over 10 megawatts require an often lengthy environmental assessment -- the bar for such assessment of coal-fired plants is 150 megawatts.

Offshore wind has been floated as an area for potential renewable growth, with the government now planning to generate up to 45 gigawatts by 2040.

That is a massive jump from the 20,000 kilowatts currently being produced, and not everyone is convinced it is realistic.

"Unlike the EU market, there's not very many places that are suitable for wind generation," said Shinichi Suzuki, CEO of XSOL, a Japanese firm specializing in solar panel installation and operation.

"Offshore wind generation requires a lot of specialized knowledge... and while 10 years ago the generation costs of wind were cheaper than solar, now the situation is reversed, solar is much cheaper."

XSOL also believes solar is uniquely suitable for Japan as a "resilient" power source on homes and businesses that can continue supply after disasters like earthquakes.

"Renewables are allowed grid access on the condition that they accept output curtailment without any compensation if supply exceeds demand," she points out.

And in some places, transmission line capacity is reserved for nuclear plants that are not even operating.

Suzuki is pragmatic about the challenges ahead, calling the 2050 carbon-neutral goal "possible, but difficult."

"It depends on our will. As the Japanese people, the government, the industry -- we need to work hard."