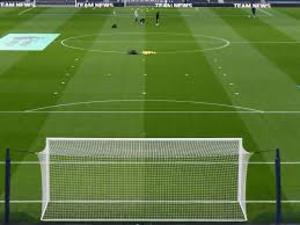 The last 12 months saw Euro 2020 and the Copa America postponed, the Champions League final played behind closed doors, supporters -- the lifeblood of the game -- shut out of stadiums, no Ballon d'Or winner crowned and clubs plunged into economic crisis. All as a result of a virus most people had not heard of when the year began.

It shows the folly of trying to predict how the next 12 months might turn out.

And some of the game's biggest names have left us in 2020: Diego Maradona of course, but also Paolo Rossi, Nobby Stiles, Jack Charlton, Gerard Houllier, Michael Robinson and more.

Football, like everything, has been scarred by the Covid-19 crisis and it will be well beyond 2021 before the sport returns to normal, if it ever does.

Those in charge of the sport at the top level will be determined to ensure that this time, the show goes on as planned, but it is impossible to know at this stage, for example, in what conditions the Champions League final -- set for Istanbul after being moved to Lisbon this year -- or the European Championship will be held.

UEFA still has to decide if it can realistically organize the Euro as planned, at 12 different venues in 12 separate nations all across the continent, as far apart as Baku to Dublin.

"We're smarter and stronger than last year as we now know that anything can happen," UEFA president Aleksander Ceferin said recently.

He added: "But theoretically, we could hold the Euro in twelve countries, in eleven, in ten, in three countries or in one."

Wherever it takes place, and whoever is allowed to attend matches, the Euro will be the main footballing event of the year, as France aim to add the continental title to the World Cup they won in Russia in 2018.

Indeed 2021 presents many challenges for Didier Deschamps' team: they begin their defense of the World Cup when the qualifiers for Qatar 2022 start in March, while in October they will join Italy, Spain and Belgium in the Final Four of the UEFA Nations League.

In between, they will fight it out for the Euro, with group games against a Germany side currently in crisis, Hungary and defending European champions Portugal, who beat Les Bleus in the 2016 final and have more to them than just a still potent 36-year-old Cristiano Ronaldo.

Take Joao Felix for example, who at 21 is almost a year younger than Kylian Mbappe, the symbol of the current France team that is aiming to match the achievement of the last French side to lift the World Cup.

With Deschamps as captain, they followed winning the 1998 World Cup by claiming Euro 2000 and holding both titles at the same time, a feat since achieved by Spain when they claimed the 2010 World Cup as well as Euro 2012.

France look arguably even stronger than they did in 2018, having reincorporated players like Kingsley Coman and Adrien Rabiot and introduced Marcus Thuram, son of Lilian and a fine talent in his own right, and the 18-year-old Eduardo Camavinga.

"Our first appointment is the World Cup qualifiers in March," pointed out Deschamps, phlegmatic as ever, recently.

"I don't know how the Euros are going to go but I'm working on it as best as I can."

So much uncertainty, but at the same time so much to look forward to after the trials of the last year, not least for a country like North Macedonia, who have qualified for their first major tournament.

The Euro semi-finals and final are due to be played at Wembley, which will also be the scene of an England versus Scotland showdown, in a throwback to Euro '96.

"It will hopefully be a fantastic occasion with fans, but that's the one thing none of us can control," admitted England manager Gareth Southgate in a nod to the possibility that spectators will still be barred by the middle of next year.

How the Scots will be eager to be allowed to descend on London in large numbers, but the prospect of playing in the final on their own turf will provide extra motivation for the English.

Belgium, the Netherlands, Italy and Spain, with Barcelona's Ansu Fati emerging, will be among the other contenders to stop France.

Whoever comes out on top, the hope is that football will not suffer the same turmoil in 2021, and that supporters will be able to return in ever greater numbers as the year goes on.