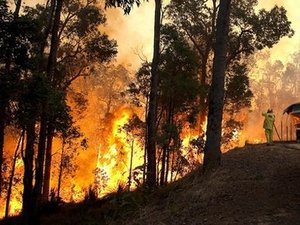 A natural disaster was declared in areas of Perth on the country's west coast, where two major blazes raged out of control for a second day, triggered by heat and high winds brought by last week's ferocious Cyclone Yasi.

Fast and unpredictable flames swept through rugged terrain at Roleystone, on Perth's southern fringes, and along its northern outskirts at Red Hill, leveling 59 homes and scorching hundreds of hectares of forest.

"Fifty nine structures have been damaged or destroyed," the Fire and Emergency Services Authority (FESA) said. "An additional 28 structures have sustained partial damage of varying degrees."

A bridge over the Canning River collapsed in the flames and would be impassable for at least three weeks, FESA added.

Emergency chief Craig Hynes said there had been no serious injuries or fatalities, with officials prepared for the "remarkable" winds, but he cautioned that authorities were yet to bring the fires under control.

Both were burning in areas of heavy vegetation on the city's outskirts, in rugged terrain that was difficult to access except by air.

The emergency came exactly two years after the deadly "Black Saturday" firestorm which claimed 173 lives in southeastern Victoria state, an anniversary marked Monday with memorial services in the worst-hit towns.

"It's a reminder to all of us just how long and painful the journey back from natural disaster can be," said Prime Minister Julia Gillard.

"It's going to strike .... as perhaps a very cruel irony that on the day they mark the two-year anniversary of the Victorian bushfires so many Victorian communities are actually battling floodwaters," she added.

A top-category storm when it tore across Australia's northeast tourist coast on Thursday, Yasi trashed hundreds of homes and decimated crops worth at least Aus$500 million.

It came weeks after record flooding which killed more than 30 people and swamped tens of thousands of homes in Queensland and Victoria, forcing the major city of Brisbane to a standstill for several days.

Reconstruction chief Major-General Mick Slater said that lives had been "absolutely destroyed" by the storm, warning that recovery would be protracted and difficult.

Slater said the "flattening" of the region's agriculture industry had left many "with their world torn apart" and wondering how they would make ends meet.

"It is a large area and there are a lot of people there who are really suffering," Slater told public radio.

"We can rebuild the roads and the bridges and the schools and the like, but what is going to take a long time is for people to rebuild their lives."

Australia's extreme weather has been linked to an extremely strong La Nina climate pattern, usually characterized by increased flooding and cyclones for the vast southern continent.