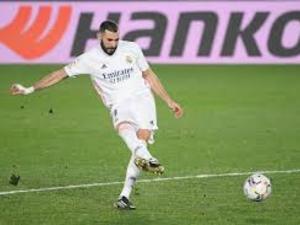 Real Madrid will attempt to sign off the year with a sixth win on the bounce as Zinedine Zidane's in-form side continue their pursuit of La Liga leaders and city rivals Atletico Madrid on Wednesday.

Defending champions Real are level on 32 points with Atletico but have played two games more than Diego Simeone's men ahead of their trip to Elche.

Karim Benzema has been the driving force behind Real's excellent December run, claiming key goals in wins over Athletic Bilbao, Eibar and Granada after securing the club a spot in the Champions League knockout phase.

Eden Hazard is also in line to feature after recovering from his latest injury setback. The Belgian was an unused substitute in last week's victory over Granada and has made just three league starts this campaign.

Real coach Zinedine Zidane hopes the short festive break afforded to his players over Christmas will not interrupt the momentum built over a domestic five-game winning streak.

"We're going to keep working hard. We have an awful lot of games, we should be pleased with what we're doing," said Zidane.

"We're going to lose games again, but we're going to try to win as many as possible. From time to time it's inevitable."

Atletico have responded well to the 2-0 defeat by Real earlier this month that snapped their 26-match unbeaten league run.

However, the loss of Kieran Trippier is a substantial blow to a defense that has conceded just five goals in 13 matches, easily the fewest in the division.

The England defender, an ever-present for Atletico in La Liga and Europe this term, was recently hit with a 10-week ban for breaching betting rules and will be unavailable until March. The club is said to be considering an appeal.

Diego Costa has reportedly asked to terminate his contract for family reasons, having just returned from a blood clot that sidelined the Brazil-born Spain international for a month.

Joao Felix is expected to return after missing the 2-0 win at Real Sociedad, although the Portuguese star hasn't scored in the league since November 7.

Barcelona will bid to end a turbulent 2020 on a winning note at home to Eibar, but Ronald Koeman's side will be without Lionel Messi after the Argentine was granted an extended break as he recovers from an ankle knock.

The six-time Ballon d'Or winner admitted his aborted departure in the summer had affected him at the start of the season, but stressed he felt "excited" to play under Koeman.

"Barca is my life, I'm in love with the club. And the city, my children were born here," Messi said in an interview with Spanish TV channel La Sexta broadcast on Sunday.

"I feel good right now, ready to fight for everything."

Player to watch: Iago Aspas The Celta Vigo forward, the leading Spanish scorer in La Liga three of the past four years, has inspired a turnaround at Balaidos after the team won just one of their first 10 matches.

The 33-year-old Aspas, who in November became the club's all-time leading scorer in the top flight, has netted eight times in 15 appearances this term and led Celta back into the top half following four wins in five games before Christmas.

Much like with Real and Benzema, who is level at the top of the scoring charts with Aspas, Celta's success in 2021 could heavily rely on the former Liverpool attacker.

500 - Diego Simeone will take charge of his 500th match as Atletico boss against Getafe on Wednesday. He has won 300 games since his appointment in December 2011.

35 - Lionel Messi has been involved in more La Liga goals than any other player this year. The Argentine has scored 19 times and provided 16 assists.

9 - the number of games without a win for Real Sociedad across all competitions. Two weeks ago the Basques held top spot, but three successive defeats have dropped Imanol Alguacil's side six points off the pace.