Ghassan Salameh: Origin of Dispute is South Lebanon, Tribunal is Part of it 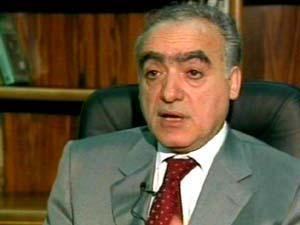 Former Culture Minister Ghassan Salameh has said that the dispute among Lebanon’s politicians lies on southern Lebanon and the Arab-Israeli conflict.

“Some believe that southern Lebanon should remain alive to confront Israel in the name of the Arab group as long as no solution has been yet reached on the Arab-Israeli conflict,” Salameh told pan-Arab daily al-Hayat in an interview published Monday.

“On the other hand, there is a Lebanese side that says Lebanon should no longer bear alone the burden of the Arab-Israeli conflict,” he said.

“The international tribunal is part of that dispute,” Salameh, who currently resides in Paris, said.

Salameh told al-Hayat that different labels have been given to the dispute over time: Safeguarding the Palestine Liberation Organization, Safeguarding the arms of the resistance and recently the problem of the Special Tribunal for Lebanon.

He blamed politicians for favoring to get foreign support rather than achieving internal understanding. Salameh called the current stage “a new chapter of a 40-year-old tragedy.”

Salameh stressed that Syrian President Bashar Assad’s interview with the Wall Street Journal, in which he mentioned how the shape of the Lebanese government should be, was a clear change in regional policies that would have repercussions on the international tribunal and Lebanon’s foreign policy and its security situation.

Asked if he believed Premier-designate Najib Miqati was a centrist, the former minister said: “He might be a centrist but he has to implement what political forces ask from him.”

He described the collapse of the Hariri government and the future formation of a cabinet by Miqati as a “change in the balance of power.”

When asked about the indictment in ex-Premier Rafik Hariri’s assassination case, Salameh said: “I don’t know anything about it … The court would most probably continue (to function) but without Lebanese cooperation.”