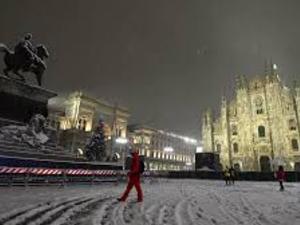 Storms hit much of northern Italy on Monday while business hub Milan woke up to a thick layer of snow.

Around 20 centimeters (8 inches) of snow fell in the city, where a 76-year-old homeless man died in hospital after being found in the street.

The storms caused tailbacks on several motorways, notably the A26 bound for Italy's largest commercial port of Genoa, capital of the Liguria region.

Several trains were disrupted with falling trees causing delays of up to two hours.

The Great St Bernard Tunnel on the border with Switzerland was closed to heavy goods vehicles.

With a typically humid climate, Milan rarely sees snow on a large scale but January 1985 notably saw 90 centimetres, with smaller falls in 2006 and 2009.

Rome was hit by heavy rain as well as strong winds and storms.

The wintry weather was expected to move further south overnight towards the Campania region, around Naples, where heavy rainfall was forecast.