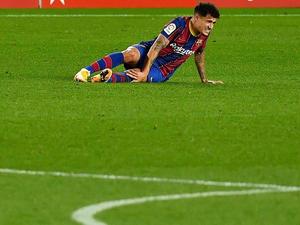 Barcelona midfielder Philippe Coutinho needs surgery to mend a torn meniscus after the Brazilian limped off the pitch late in Tuesday's drab home draw with Eibar.

His loss adds to a long list of injuries including Lionel Messi with the club sixth in La Liga seven points off leaders Atletico Madrid.

"It's the meniscus in his left knee and it needs surgery, which will be carried out in the coming days," a Barcelona statement said.

But Coutinho failed to replicate the success he enjoyed on Merseyside in Barcelona, where his talent has withered in Messi's shadow. He was loaned out to Bayern Munich last season but the Germans opted against signing him permanently.