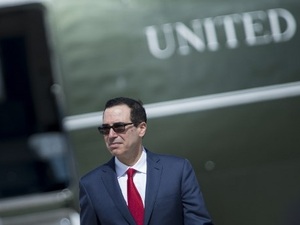 "The United States Treasury chief Steve Mnuchin arrived today morning (Wednesday) atop a high-ranking delegation, in the first such visit to Sudan," a government statement said.

Their talks are expected to focus on Sudan's deteriorating "economic situation, and U.S. aid to Sudan and debt relief," the government said.

Sudan is struggling with a chronic hard currency shortage and galloping inflation that have hit the purchasing power of all social classes.

Its external debt is estimated at around $60 billion.

The United States formally removed Sudan from its crippling blacklist on December 14 as part of a quid pro quo for the mainly Arab country's normalization of its relations with Israel.

Sudan agreed the move in October but said it would only come into force after its approval by a yet-to-be-formed parliament.

In return, Washington has earmarked hundreds of millions of dollars in aid for Sudan.

Sudan's justice ministry said the total amount of direct and indirect U.S. aid envisaged under the deal amounted to $1.1 billion, in addition to another "billion dollars that the US has committed to transferring to the World Bank to pay arrears Sudan owes."

Sudan has been undergoing a rocky transition since the army toppled veteran president Omar al-Bashir in April 2019 following months of mass protests against his rule.

The joint military-civilian administration charged with overseeing the transition has sought to end the country's international pariah status by forging closer ties with the U.S.