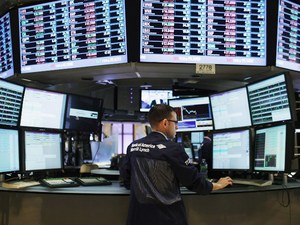 The U.S. economy shed 140,000 jobs in December, according to the Labor Department, reflecting the hit from the latest spike in coronavirus cases as daily deaths in the U.S. from the virus hit a new peak.

But analysts are expecting another round of government relief after President-elect Joe Biden takes office later this month, a prospect boosted by Senate races in Georgia this week that gave Democrats control of the chamber.

All three major indices finished at records Thursday, again shrugging off the fallout from Wednesday's chaos on Capitol Hill, when supporters of outgoing President Donald Trump attacked and occupied the U.S. Capitol for hours in an effort to overturn the election.

Despite that siege, lawmakers met late into the night to validate Biden's victory.

"The markets seem to remain buoyed by clarity on the political front after a drawn-out election process that culminated with the disturbing violence at the Capitol this week," Schwab analysts said in a note.