At Least One Dead in Morocco after Heavy Rains 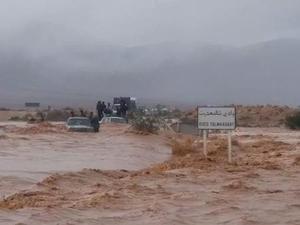 Torrential rain in Morocco this week after a period of drought has caused at least one death in its economic capital Casablanca, as bad weather remains forecast for the coming days.

Authorities said one person was killed and four injured after the roof of a structure in the old city of Casablanca caved in on Thursday evening.

A dilapidated house occupied by squatters has also collapsed in another part of the city, authorities said. Two people were rescued while the search operations continued.

Between Monday and Friday, precipitation levels in Casablanca rose from 35 millimeters to 100 millimeters, according to the meteorological department.

Authorities urged motorists to limit their movements due to storms expected until the end of the week, with wind gusts of up to 100 kilometers per hour forecast along with rain and hail, and snow at high altitude.

Moroccan media and social media users have criticized Casablanca's dilapidated water drainage systems and what they say is authorities' lack of action.

Yet the country has also welcomed the rain after a period of drought that has hurt its crucial agricultural sector, which accounts for 14 percent of the country's GDP.