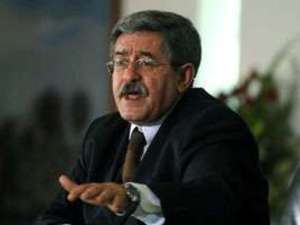 Former Algerian premier Ahmed Ouyahia, on trial for corruption, has admitted to receiving gold bars from Gulf donors then selling them on the black market, the official APS news agency reported.

Their retrial opened Saturday after the supreme court in November annulled their earlier convictions following an appeal, APS said.

Both had served under former president Abdelaziz Bouteflika.

Several former ministers and other well-known figures are also on trial over the same affair, APS said.

Ouyahia was questioned Saturday over the source of assets in his bank accounts, totaling over $5 million.

He said some had come from black market sales "of gold bars, which he received as a gift, in his capacity as prime minister, from leaders of Gulf countries," APS added.

The 60 gold bars were estimated to be valued at some $2.5 million.

Ouyahia said he had previously kept quiet about the matter so as "not to undermine the relations between Algeria and certain friendly countries".

He also admitted to not having declared the sums to tax inspectors.

The trial of Ouyahia and Sellal in December 2019 was the first in a series of high-profile corruption cases launched after Bouteflika resigned earlier that year.

It was also the first time since Algeria's independence from France in 1962 that former prime ministers had been put on trial.

Ouyahia was prime minister four times between 1995 and 2019, and had been sentenced to 15 years behind bars.

Sellal, who served from 2012 to 2017 and managed four of Bouteflika's election campaigns, was sentenced to 12 years in jail.

The pair were sentenced to further jail time in separate cases last year.

Bouteflika, who was Algeria's longest-serving president, was forced to resign in April 2019 after losing the backing of the army amid enormous street protests against his decision to seek a fifth term.

Authorities then launched a string of investigations against high-ranking former officials and business figures, several of whom have been convicted.

But the state has also cracked down on opposition figures, and many see the trials as score-settling between rival officials rather than a genuine effort at reform.