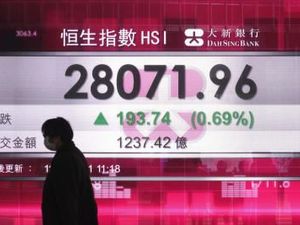 Asian markets mostly rose with the dollar Monday following another record performance on Wall Street as investors cheered the prospect of a further massive stimulus for the US economy, with President-elect Joe Biden calling for a spending spree in the trillions of dollars.

With vaccines being rolled out around the world and key risk events including the US election, Georgia senate runoffs and Brexit now out of the way, observers said focus is now on the expected global recovery from last year's economic catastrophe.

The need for more financial help for the world's top economy was laid out Friday with data showing 140,000 people lost their jobs in December -- the first fall since April -- as virus infections and deaths surged across the country.

Biden, who will be sworn in as president on January 20, said he would press for a new rescue package that includes $2,000 direct payments to taxpayers and help for small businesses.

"The price tag will be high," he warned as he promised to lay out his proposals Thursday. "It will be in the trillions of dollars."

He added: "If we don't act now, things are going to get much worse and harder to get out of a hole later."

Investors welcomed the prospect of another spending splurge that will provide a huge boost to the economy, coupled with Federal Reserve financial support and record low rates for the foreseeable future.

The dollar extended gains across the board, and was sitting at a three-week peak against the yen.

Wall Street's three main indexes all finished last week at all-time highs, and the positive energy flowed through to Asia.

Hong Kong, Shanghai, Manila and Jakarta were all well up, with Seoul driven by a surge in market heavyweight Samsung fuelled by reports it is in talks with US giant Intel over making some of its best chips.

However, while the broad consensus is for a strong run in equities this year, there is a feeling that the latest rally may be petering out.

"After being bullish for several months, we are definitely becoming more cautious on the stock market up at these levels," Matt Maley, at Miller Tabak + Co, said, adding that most of the surge in the S&P 500 from March its March trough is "behind us".

And Axi strategist Stephen Innes added that fears about the virus, which continues to wreak havoc around the world and force governments to impose new lockdowns, remained the main stumbling block.

"Covid concerns continue to hang like a nasty cloud over the market, and given a great deal of optimism in stocks and oil is linked to the rollout of vaccines, investors are sitting with fingers and legs crossed that there won't be any negative news flows on this front (which) would prompt a sharp negative market reaction," he said in a commentary.

He also pointed to ongoing China-US tensions after the White House said it would end self-imposed restrictions on official contacts with Taiwan, a move likely to irk Beijing.

The move will add to complications for Biden as he assumes the presidency, with any move to reverse the decision opening him up to accusations of being soft on China.

Oil prices dipped slightly but remain at 10-month highs, supported by hopes for more stimulus and following Saudi Arabia's announcement last week that it plans to slash output by a million barrels a month in February and March.

Tokyo - Nikkei 225: Closed for a holiday