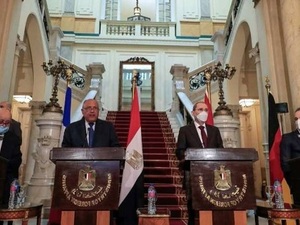 The foreign ministers of Egypt, Jordan, France and Germany met in Cairo Monday in the latest push to revive Israeli-Palestinian talks stalled since 2014.

The quartet discussed "potential steps to advance the Middle East Peace Process" and work towards "re-launching a credible peace process between the Palestinians and Israelis," a joint statement read.

The Palestinians want an independent state with East Jerusalem as its capital.

If a two-state solution fails, the world must "say if it accepts a state with an apartheid system," Safadi said.

Israeli settlement in the West Bank has taken place since the Jewish state occupied the territory in 1967.

It accelerated under the leadership of Prime Minister Benjamin Netanyahu and during the pro-Israel administration of outgoing U.S. President Donald Trump.

French Foreign Minister Jean-Yves Le Drian said Israeli settlement in the West Bank is "contrary to international law and if it were to continue, it would reduce the possibilities of a Palestinian state."

The group of four said it "expressed willingness" to work with the incoming administration of U.S. President-elect Joe Biden "towards facilitating negotiations leading to a comprehensive, just and lasting peace."

The group, which met twice last year in Germany and Jordan, said they would meet next in Paris, without giving a date. The ministers also met with Egyptian President Abdel Fattah al-Sisi.

One must always remember that it is the PA "President" Abbas who has refused to talk with Israel for the past 5 years, so the Foreign Ministers have to concentrate on him to try and persuade him to change his stance.