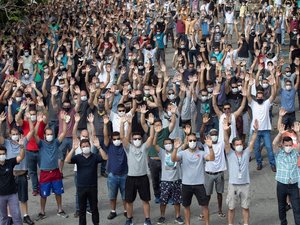 Thousands of workers on Tuesday protested the pending closure of carmaker Ford's three Brazilian factories at the cost of some 5,000 jobs.

Some 3,000 Ford employees in protective facemasks gathered at Ford's plants at Camacari in northeast Brazil and another 500 at Taubate in the southeast, both closed with immediate effect.

"It was shocking news, the worst possible," said Felipe Monteiro, a 34-year-old electronic technician and father of two who has worked at the Taubate factory for 16 years.

Ford said Monday that losses exacerbated by the coronavirus epidemic would see it close all three its three factories in Brazil, where it has operated for a century, saying the move was "very difficult, but necessary."

Production at Camacari and Taubate would cease immediately, except for manufacturing of some parts which would continue for a few months.

The Troller plant in Horizonte will operate until the fourth quarter.

The Covid-10 pandemic, it added, "amplifies persistent industry idle capacity and slow sales that have resulted in years of significant losses."

But President Jair Bolsonaro on Tuesday accused the company of lying about its reasons for the closures.

"Ford failed to tell the truth. They want subsidies," Bolsonaro said at the Alvorada Palace, his official residence in the capital Brasilia.

"Do you want us to continue giving them 20 billion reais (about $3.6 billion) as was done in recent years? No!" the president told supporters, without giving any context to the amount mentioned.

A Ford spokesperson in the US replied to Bolsonaro's accusations by saying: "The decision by Ford Brazil and circumstances behind it speak for themselves. There is nothing more to say."

Ford said it would continue serving South America with cars sourced from Argentina, Uruguay, and other markets.

New vehicle sales in Brazil retreated by more than 26 percent in 2020 due to the health crisis, the Fenabrave automotive federation said last week.

Car sales dropped 28.57 percent and that of buses by 33 percent.

News of the closures came as a bombshell in recession-hit Brazil, which is battling record unemployment, and elicited criticism of the inability of Bolsonaro's government to create a favorable business environment.

Brazilian media widely attributed Ford's departure to high production costs and a complex tax system, and Julio Bonfim, head of the Bahia Metalworkers Union, said it was largely a product of "economic instability" in the country.

Ford said it would work with unions to develop an "equitable and balanced plan" to mitigate the impact of the closures on workers.

Brazil is the country in the world with the second-highest number of reported coronavirus deaths, with more than 203,000 lives lost.