Wehbe on Increasing Israeli Violations: It Makes Us Fear Something 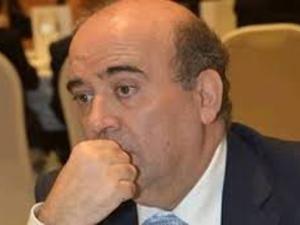 Caretaker Foreign Minister Charbel Wehbe denounced on Wednesday Israel’s constant violation of Lebanese airspace saying “it makes us fear that Israel is up to something,” Nidaa al-Watan newspaper reported.

“There is no accurate information about the possibility of an aggression against Lebanon, but everything Israel is doing makes us fear something,” said Wehbe in remarks to the newspaper.

He added: “We must remain alert of this fear. We do not expect anything good or a positive action from Israel because every act it does is negative and harmful for Lebanon.”

Wehbe stated: “Israeli enemy warplanes flying and violating the Lebanese airspace is in itself a clear and blatant aggression, even without making a direct military attack. The Security Council must officially document the Lebanese complaint, and it must deter Israel from its attacks.”

Lebanon on Tuesday filed a U.N. complaint against Israel over its intensive aerial violations in recent days.

The Minister called on the UNIFIL peacekeeping forces in south Lebanon to “play their role in this field. Standing like a witness who has not seen a thing is not enough. They must document and report to the UN the Israeli violations.”

Israeli warplanes had on Tuesday staged successive overflights at low altitude in the skies over the South, especially its western and central sectors, before reaching Beirut and its suburbs.

The jets also violated the Lebanese airspace over the southern regions of Nabatiyeh and Iqlim al-Tuffah, staging mock raids at medium altitude.

Israel regularly violates Lebanon airspace, often to carry out strikes in neighboring Syria. On Christmas Eve, Israeli jets flew low late into the night, terrorizing Beirut residents who are no strangers to such flights. They were followed by reported Israeli strikes in Syria.

“it makes us fear that Israel is up to something"
It probably is, making sure that Hizballah, which with the active support of the Government of Lebanon, violates Resolution 1701 by being armed and south of the Litani, doesn't intend opening an offensive across the border.

So Israel is not violating 1701 by flying into Lebanese airspace in an agressive, intimidating and threatening way. Israel is supposed to be the more stable military Goliath are they really in fear of little David!!
or are they just being bullies for that's what they really are old style colonialists who think that the only way of achieving security is by force, that way has never and will never succeed.

The gulf states that used to come to Lebanon figured it out before us you smarty.

Sign a peace treaty in return of F35, our lands return and draw the borders including sea.