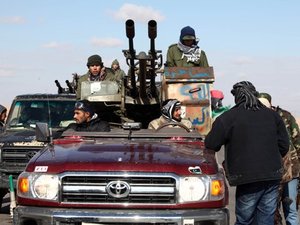 Libyan Defense Minister Osama Juili said Wednesday that the oasis town of Bani Walid was under government control as he toured the former Moammar Gadhafi bastion days after deadly clashes.

"The town is in the control of the Libyan government," Juili told reporters. "The problem that started has been resolved," he added, referring to clashes on Monday in which at least five people died.

"It was an internal problem. The fighting was not between thwar and Gadhafi diehards," he said referring to militia groups composed of fighters from the uprising that ousted the veteran strongman last year.

"It was between two groups of young men. One of them was the May 28 Brigade," he said referring to an ex-rebel formation in the town.

Bani Walid was the penultimate town to fall to Libya's new government during last year's uprising.

A longtime recruitment ground for elite troops of Gadhafi’s armed forces, it was captured in October last year after a six-week siege, just days before the fallen autocrat was killed in the fall of his hometown Sirte.