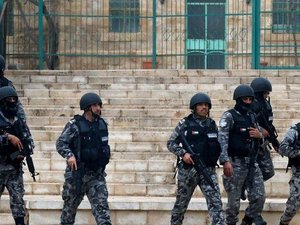 A Jordanian court on Wednesday handed heavy prison terms to 11 people convicted of joining the Islamic State group and of planning attacks against churches and security personnel in the kingdom.

Three of the defendants were sentenced in absentia after travelling to Afghanistan in 2019 to join the group in its fight against U.S. forces and the Taliban.

They had stayed in touch with the other eight, who had been arrested ahead of planned attacks in Jordan under the banner of IS.

Their targets included security forces and churches in the Mafraq and Zarqa provinces, according to a charge sheet seen by AFP.

Zarqa was home to Abu Musab al-Zarqawi, the former leader of Iraq's al-Qaida franchise which was the predecessor to IS. Zarqawi was killed by a U..S air strike in 2006.

The eight defendants present in court on Wednesday were sentenced to between five and 15 years, while those who were in Afghanistan were handed terms of nine years.

The eight had been found guilty on charges including "plotting to carry out terrorist acts" and "attempting to join armed groups and terrorist organizations."

All the defendants were suspected of supporting IS.

The Jordanian intelligence services discovered the militants' plans and arrested them in 2019, according to the charge sheet.

Jordan, a member of the U.S.-led coalition against IS in Syria and Iraq, has suffered a number of deadly jihadists attacks including one in December 2016 which left 10 people dead, mostly security personnel.