Fines for U.S. Lawmakers Who Refuse to Walk Through Metal Detectors 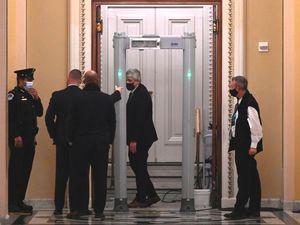 US lawmakers who refuse to go through metal detectors installed at the House of Representatives after last week's Capitol riot will be fined, Speaker Nancy Pelosi said late Wednesday.

The fine for the first offense will be $5,000, and $10,000 for the second, Pelosi said in a statement. Fines will be docked directly from members' salaries.

"It is tragic that this step is necessary, but the Chamber of the People's House must and will be safe," Pelosi said as she announced the measure.

Tighter safety rules came into effect after a mob of supporters of President Donald Trump violently broke into the building on January 6 in an attempt to stop the certification of Joe Biden as the next US president.

Five people died in the day of violence.

Metal detectors were installed at the entrances to the US House for the first time Tuesday in response to the riot.

Magnetometers have been used for years at all visitor and staff entrances to the Capitol and many other federal buildings.

But lawmakers have been allowed to go around those security screenings provided they were wearing their congressional pin.

On Wednesday, first term Republican lawmaker Lauren Boebert, who had threatened to bring her firearm, was in a standoff with police when she refused to hand over her bag after the metal detector started beeping.

"Sadly," Pelosi wrote, just days after the new safety protocols were in place, "many House Republicans have disrespected" the Capitol police "by verbally abusing them and refusing to adhere to basic precautions keeping members of our Congressional community, including the Capitol Police, safe."