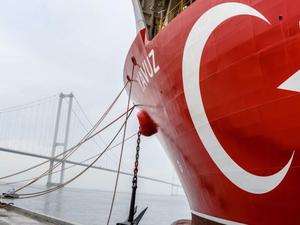 Turkey's defence minister has called on the United States to reopen talks about Ankara's controversial purchase of a Russian air defence system, urging Washington to move past sanctions and threats.

But Hulusi Akar also told foreign reporters in Ankara on Wednesday that Turkey was in discussions to receive a second batch of the advanced S-400 missiles from Russia, which compete with US Patriots.

The issue will pose an immediate challenge for US President-elect Joe Biden, who is expected to take a tougher line with Turkish President Recep Tayyip Erdogan.

After more than a year of warnings, Washington hit Turkey's military procurement agency with sanctions last month under a 2017 law which punishes major military purchases from Russia.

Akar emphasised the need for dialogue between the NATO allies to address Washington's concerns.

"Let's sit down, let's talk, let's make the effort to find a path to resolve this," Akar said.

Before Washington sanctioned the Turkish Presidency of Defence Industries, Ankara had sought to set up a working group with US defence officials to assess the impact of the S-400s on NATO hardware.

Such efforts went nowhere, however. Turkey made the purchase after failing to come to terms on deliveries of the Patriots with their manufacturer Raytheon.

The US State Department said last month that the sanctions would stay in place as long as the S-400s remained part of Turkey's defences.

Still, Washington's punishment was lighter than feared, avoiding the Turkish banking sector and not hurting the fragile economy.

Akar said Turkey enjoyed good working relations with Biden when he was vice president under Barack Obama between 2008 and 2016.

But in remarks that will likely raise hackles in Washington, Akar also confirmed that "talks continue" on a second package of the S-400s, insisting they were always part of the Russian deal.

Turkey took delivery of the first batteries in July 2019 and tested them last year.

Despite this, Akar said he was "optimistic" for Turkey to return to the US F-35 fighter jet programme, as it had been a significant buyer and parts manufacturer.

Washington moved quickly to suspend Turkey's involvement in the programme, barring it from acquiring the next-generation planes in reprisal.

"We want to return to the F-35 programme, we are always optimistic. We want this decision to be undone," Akar said.

The defence minister added Turkey was still in talks for possible purchases of Franco-Italian Eurosam's SAMP/T missile system, which is another Patriot equivalent.