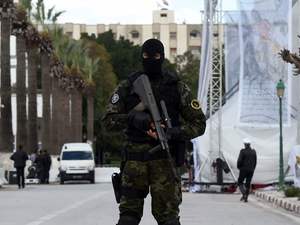 Ben Ali was deposed a decade ago, on January 14, 2011, after weeks of demonstrations that saw security forces kill 132 protesters and wound 4,000, according to a national commission investigating abuses and violations.

"Former or current ministry of interior officials accused of arbitrary killing of protesters and other human rights violations committed during the revolution defy the judicial system by failing to appear before court hearings time and again," Amnesty said in a statement.

The refusals to obey court summons illustrate "the sense of impunity they continue to enjoy in Tunisia today," the rights group added, deploring "persistent obstruction" by the security sector.

Courts made up of magistrates specially trained in transitional justice are responsible for judging the most symbolic cases investigated by the country's post-revolution Truth and Dignity Commission.

The commission undertook its investigations from 2014 to 2018, focusing not only on abuses perpetrated by authorities during the mobilisation against Ben Ali, but also those committed over the near six decade period of 1955 to 2013.

Some 200 trials have got underway in recent years. These include at least 10 since May 2018 focusing on violent repression during the 2011 revolution, following the indictment of 12 serving and former officials, according to Amnesty.

"Dozens of victims and witnesses have testified in court, often in the absence of the accused," the rights group said.

No judgements or verdicts have been handed down and none of the cases have yet even reached the pleading phase, Amnesty lamented.

It urged authorities to "provide guarantees for the diligent prosecution" of those accused of killings and other grave violations.

"These trials may be the last chance to achieve accountability for the crimes committed and to deliver justice to the victims and their families," it added.