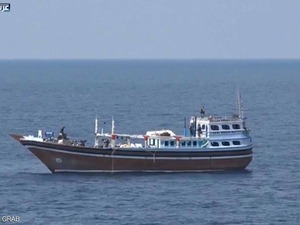 The Lebanon- and Africa-bound, Togo-flagged ship that sailed from Turkey’s Mersin was intercepted by Greek authorities west of the island of Crete on February 27, 2016, the indictment said. It was owned by Tripoli-based Lebanese nationals Kamal K. and Mohammed A.

“The hunting rifles were shipped using the name of the Yassine Middle East Company for Trading and Industry without its knowledge with the aim of achieving financial gain,” the indictment said, identifying Lebanese nationals Mohammed A., Kamal K. and Talal D. as culprits in the falsification scheme.

The indictment noted that the shipment did not enter any Lebanese port and that Greek authorities are still holding the hunting rifles container and that they sought to send the ammonium nitrate container to “its main destination, Congo, in 2020.”

The development comes days after an al-Jadeed TV report suggested that three pro-regime Syrian businessmen were behind another ammonium nitrate shipment that exploded at Beirut’s port on August 4, 2020.

The Aug. 4 explosion, one of the largest non-nuclear blasts in history, killed around 200 people, wounded over 6,000 and devastated swathes of the Lebanese capital, which made it the country’s worst peacetime disaster.