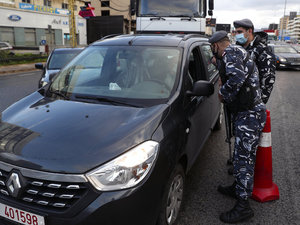 A full lockdown started in Lebanon Thursday, with residents barred even from grocery shopping and dependent on food deliveries, in a bid to slow a surge in novel coronavirus cases.

The new restrictions were only loosely respected in some areas of the country, however, after mass protests in recent years against a political elite held responsible for a deepening economic crisis.

The lockdown, ordered after some hospitals started to run out of intensive care beds, includes a 24-hour curfew until January 25.

Non-essential workers are barred from leaving their homes, and supermarkets are supposed to operate delivery services only.

Those wishing to request an emergency exemption -- to see a doctor for example -- can do so by sending a mobile phone text message to 1120 or by filling in a form online on covid.pcm.gov.lb

In the capital, roads were quieter than usual, while non-essential shops remained shuttered. Security forces stopped drivers at several checkpoints in the center of the city.

But in some areas, some people ventured out to buy groceries from local shops.

Recent days have seen Lebanon register record daily Covid-19 caseloads in one of the steepest increases in transmission worldwide.

In Geitawi Hospital in Beirut on Thursday, director Pierre Yared said the emergencies department was brimming with more than 30 people suffering from Covid-19 the previous day.

"The ER was filled with corona patients, there were no other patients," he said.

The strict lockdown -- complete with the ban on grocery shopping -- came into effect after caretaker Health Minister Hamad Hassan was admitted to hospital with Covid-19 late Wednesday, state media said.

Its announcement on Monday raised fears of food shortages in impoverished and remote regions where deliveries are not readily available.

For several days, Lebanese have flooded supermarkets and chemists in a desperate bid to stock up.

Some are worried the new restrictions will pile additional suffering on the country's poorest.

Lebanon, a country of more than six million, was already grappling with its worst economic downturn in decades when the pandemic hit.

Previous lockdowns have forced businesses to close and deprived some -- including many who earned money casually from day to day -- of an income in a country where around half the population lives in poverty.

The World Bank Group on Tuesday approved a $246 million aid package to help 786,000 vulnerable Lebanese, but it is unclear when that assistance will arrive.

In total, Lebanon has announced 231,936 cases since February last year, including 1,740 deaths.

Cases skyrocketed after authorities loosened restrictions during the holiday season, allowing restaurants and nightclubs to remain open until 3:00 am, despite warnings from health professionals.

A partial lockdown in place since January 7 has failed to halt the spread of the virus.

Parliament is expected to convene Friday to examine a bill to allow the import and use of Covid-19 vaccines, which authorities have previously said will arrive in Lebanon by February.

A caretaker administration is overseeing the country's Covid-19 response.

But a deeply divided political class has been unable to agree on a new cabinet to launch urgently needed reforms.

Guess who are the 6 percent: Shia Shia Shia!!!

Then why are people from ALL sects getting infected?

I love the precision of the statistic. I can't wait to see the Excel sheet...