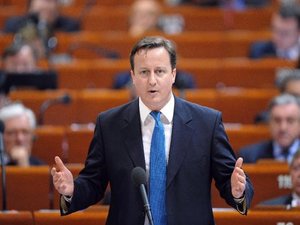 The British premier took the stage on the second day of the World Economic Forum in Davos, the annual get-together for the global business elite, and revived his simmering feud with the ailing single-currency bloc.

In a speech destined to delight his own Eurosceptic party back home and infuriate France's President Nicolas Sarkozy, Cameron scornfully dismissed French-led plans to introduce a tax on all financial trades.

"Even to be considering this at a time when we are struggling to get our economies growing is quite simply madness," he declared.

"Of course it's right that the financial sector should pay their share. In the UK we are doing exactly that through our bank levies and stamp duty on shares. And these are options which other countries can adopt."

"But look at the European Commission's own original analysis," he added.

"That showed a Financial Transactions Tax could reduce the GDP of the EU by 200 billion euros, cost nearly 500,000 jobs and force as much as 90 per cent of some markets away from the EU."

France, Germany and other EU nations could of course go ahead with a tax without Britain, but Cameron broadened his attack to encompass the whole economic management of the debt-ridden, low-growth Eurozone.

He echoed a call made on the same stage Wednesday by Germany's Chancellor Angela Merkel for more measures to boost growth but went further, calling for a root-and-branch reform of how the Eurozone is managed.

"Now, I'm not one of those people who think that single currencies can never work," he insisted. "But there a number of features common to all successful currency unions."

Cameron said a shared currency must be backed with a central bank ready to act as a lender of last resort, deep economic integration between member states and a system of fiscal transfers to offset imbalances.

"Currently, it's not that the Eurozone doesn't have all of these -- it's that it doesn't really have any of these," he declared.

In December, Sarkozy reportedly snapped that -- as Britain is not part of the single currency -- Cameron should shut up about its affairs.

Instead, the British leader listed the measures he would take if he were seeking to tackle the debt crisis -- quickly oversee a Greek debt write down, recapitalize banks and set up a financial firewall to protect states.

"That's what would make the clear difference in sentiment and outlook," he said, in a clear rebuke to Merkel's cautious strategy of incremental reform and her ruling out of pooling Eurozone sovereign debt.

While the opening day of debates in Davos focused largely on the crisis of Western capitalism, many of Thursday's sessions took a closer look at the challenges facing individual regions.

The role of Islam in the Arab world was discussed, and the state of the Middle East peace process was on the agenda, with Israeli President Shimon Peres debating with Salam Fayyad, the Palestinian prime minister.