In Locked Down Lebanon, Olympic Trap Shooter Trains in Garage 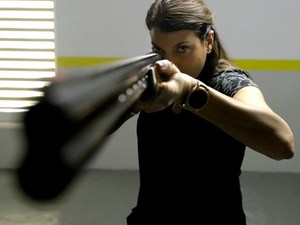 Lebanon may be under coronavirus lockdown, but that has not stopped Lebanese trap shooter Ray Bassil from training for the Olympics this summer -- between parked cars in her underground garage.

Determined to stay fit despite the pandemic, the 32-year-old turned the parking spaces under her apartment block north of Beirut into a virtual firing range -- all without shooting a single round.

Lebanon went into full lockdown in mid-January after gatherings over the winter holidays triggered a sharp rise in coronavirus cases.

Bassil herself had fallen ill from Covid-19, but sprang back into training despite the round-the-clock curfew.

"The shooting clubs were forced to close... I had no other option" than to train in the garage, she said.

"I have to stay physically, mentally and technically in shape."

Bassil is the only Lebanese to have qualified for the Tokyo games so far, and hopes are high she will win the country an Olympic medal -- a feat not repeated since a bronze in Greco-Roman wrestling in Moscow in 1980.

"The hope is for an Olympic medal, especially as it's not just my dream but also my country's," said the athlete, who will be competing in her third Olympics.

Inside the 500-square-meter (5,400-square-feet) garage near the town of Jounieh, Bassil aimed her rifle at the pale grey wall, but instead imagined flying clay plates.

Standing on one leg near a parked black car and red moped, she aimed her rifle left and right, following instructions from her cousin and temporary trainer Nahi.

In another exercise, he tapped her on the back to destabilize her and help her practice balance.

Bassil recently travelled to Italy to continue her training, before she takes part in the Shotgun World Cup in Cairo from February 22 to March 5.

Even without Covid-19, it has been a tough year for Lebanon.

Lebanese are struggling to cope with soaring prices as the country is battered by its worst economic crisis in decades.

And a huge explosion at Beirut port in August killed more than 200 people and ravaged swathes of the capital.

"All these difficulties haven't affected my morale," said the athlete, whose father was a volleyball player.

"I'm from a very sporty family and I'll be up to the challenge."

Good luck. Whatever the outcome you should be proud. God bless.