West Urged Not to Turn Back on Hungry during Austerity 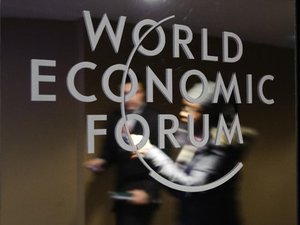 Leaders of the war against hunger said Thursday the financial crisis must not be used as an excuse by the richer world to renege on commitments, warning a failure to act would fuel unrest and immigration.

Ministers, business leaders and U.N. officials gathered at the annual Davos forum said that while the world was now producing more food than ever, there were also more mouths to feed and that a billion people were afflicted by hunger.

"Each morning nearly a billion people will wake up and be unsure how to fill even this humble cup," said Josette Sheeran, executive director of U.N.'s World Food Program told a debate here as she raised a modest plastic beaker.

"If people don't have food they have three options -- they can revolt, they can migrate, they can die."

The recent famine in parts of Somalia and food riots that have erupted in cities across Africa in the last few years have shown that a continent whose population is due to more than double by 2050 is already struggling to cope.

Bill Gates, the founder of Microsoft and now one of the world's most prominent philanthropists, said that high death rates from illnesses such as malaria and pneumonia could be attributed to the lack of food.

Gates said that although world leaders now paid more attention to the issue of food security, they were not delivering on pledges to counter hunger, highlighting the failure to follow through on promises made at a G8 summit in Italy in 2009.

It is "only in the last three or four years that agriculture has come back on the agenda ... but that unfortunately has coincided with the financial crisis," said the billionaire.

Nigerian Finance Minister Ngozi Okonjo-Iweala said the 2008 food riots in parts of west Africa should have served as "a watershed moment which woke many people up" and that the lack of support from the international community was "a bit of a let-down."

Britain's Overseas Development minister Andrew Mitchell, whose government has taken flak domestically for ring-fencing its aid budget while slashing other areas of public spending, said it was vital not to leave the most vulnerable even more exposed.

"It's extremely important that at a difficult time in the international economy, richer countries stand by their commitments and promises to the poorest who are hit first and foremost," he told Agence France Presse.

French Agriculture Minister Bruno Le Maire said that it was vital that the West remembered that food security was not only an economic but also a moral issue.

But he admitted that "there is a risk that leaders in the west will go away from this issue of food security" at a time of financial crisis.

Le Maire said one way to avoid a repeat of crises such as the recent severe shortages of food in east Africa was to build up stockpiles.

But Okonjo-Iweala said that it was not so much a question of raising the volume of production but rather ensuring that food does not go to waste.

"Africa is perfectly capable of feeding itself but needs a totally different approach in terms of strategy," she said.

"Before we used to focus so much on production but the issue is how to transform the whole value chain," highlighting the need to improve the capacity of cold storage as well as finding more local markets.

Jose Graziano da Silva, the new head of the U.N.'s Food and Agriculture Organization, insisted that it was not a question of not enough food to go round but rather how to distribute it -- especially in Africa.

"The key issue is local markets. We lose 30 percent in storage, transportation, poor harvest," he said.