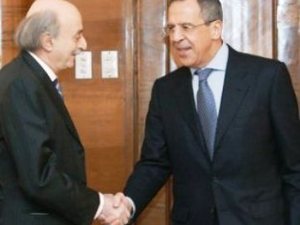 Progressive Socialist Party leader MP Walid Jumblat stressed on Thursday the importance of reaching a political solution to the Syrian crisis, adding that the Arab League deal is the only solution available, reported the Russian news agency Novosti.

“I discussed importance of a political solution according to the Arab League plan”, Jumblat said to LBC television later Thursday night, adding that “ I know that we have entered into violence and counter violence in Syria, But Russia has to condemn the Syrian regime for the violence because it was the initiator.”

He stressed the need to have an common American, Russian, Iranian, Turkish and Arab position for a solution to the Syrian crisis, adding that he is not authorized by the Syrian opposition to talk on its behalf.”

He said after holding talks in Moscow with Russian Foreign Minister Sergei Lavrov: “Russia must understand the demands of the Syrian people.”

He warned that any alternative to the Arab deal will lead to further escalation and possibly foreign intervention.

Foreign intervention is rejected by all concerned sides, said the MP, who traveled to Russia on Wednesday.

Jumblat added that Russia has cooperated with Syria in several fields, noting however that “Russia, as a friendly state, must understand the rightful demands of the people.”

“I hope that Russia will side with the voice of the rightful people,” said the Druze leader.

Earlier this week, the MP called on Russia to “launch a political initiative together with the countries concerned in order to pull Syria out of its crisis.”

The U.N. estimates that more than 5,400 people have been killed in the demonstrations that began in March 2011.

russia is understanding the demands of syrian people.

russia know syrian people does not want muslim brotherhood on power.
so russia does what it can: keeps assad alive.

syrian people like russian people and many syria man marry russia woman and have babies. So, they are like family.

The criminal, feudal warlord and collaborator with every enemy of Lebanon sees himself in such a position as to give lessons to Russia! His next move will perhaps be the US and then the Vatican and then China and then... back to his den of thieves and collaborators in Mokhtara.

Happy new year! habalkamel and boyfriend are back from a well earned vacation. I hope you boys enjoyed the free Princess Gay cruise tickets you won on gayarab dot com "by Shiites for Shiites" I hear DJ Master M_Nawwaf YoYo put a great show. Anyways welcome back girls.

Hey camelboy is back dreaming of the old days that are gone. Syria will never be the same, and ASSad is will be gone. You can wake up now.

high level critical negotiations, kasparov chess game...russia has two lucrative conditions to drop bashar:
1)keep the contracts between russia and syria till they expire...(the financial contracts will never expire..without the help of a rich country)
2) to have a long lease for the naval base in tartous.
but there is numurous traps around the problem,bashar is transferring the heavy arms to lattaqieh, creating the foundations of an alawi state thus dividing syria which automatically divide the region including lebanon..
is russia trying to convince jumblat??????is jumblat convinced by a ministate for himself from the golan hights to chouf to khalde??????/the russian bear dont invite jumblat without a purpose and receive him like a head of state,where is ras-putin in all this?.. it is very interesting to read jumblat after the visit,especially between the lines.

breaking news: jumblat from russia.... against taking the syrian problem to the U.N. OR ANY INTERNATIONALISING.

MARK the only people worse than murders and terrorists are sectarian fools like you who thrive on incitement and insults...only uneducated scum like you use enjoy ridiculing a great region such as jabal amel and which such language dont be surprised my friend if you feel alienated by a large percentage of your own people

mark is stop on.

To Jabalamel...Who are you to determine what the Syrian people really want? have they ever had a free election or referendum in the past 5 years? If the demand of most syrians as you claim is muslim brotherhood (which I doubt), let it be! who are you to decide on their behalf?

You and your camp should stop labeling everyone who disagree with ur Hizb philosophy as zionist: it only shows that you have no credible arguments! If most lebanese want your beloved armed militia as you claim, let's have a referendum. If you win, lebanon is yours and feel free to call it " wilayat el fakih- dahieh chapter" and "7alel 3aleik", then you have the right to tell people who don't like it to leave. Until then most of us feel like taken hostages by ur armed militia.

Walid. Retire. Hand it over to Taimour baik.

I agree with Mustapha on the issue of the issue of arms trade between Russia and Syria. It is possible to make the claim that Russia is trying to stall any UN based decisions that would speed up Bashar's downfall.
One has to take into consideration the geopolitical imperatives of Russia... The current syrian regime is a powerful regional ally of the soviet state and as was previously mentioned by Mustapha the naval base in Tartous plays an important factor on the decision making process of the Russian state.
However, Russia will not be able to stall for much longer because the western forces are constantly pressuring them to take a stand and oppose this tyrant.

How could such a great politician like Mr. Jumblat be so out of touch with reality on this issue, or is this a Lebanese thing? now his concern for the people of Syria is commendable, but why does he seem to be so non-pragmatic and impractical? we all hope for the best for the Syrian people, but to seek to resolve complex issues one must be practical. I think he should write a long editorial with facts and analyses if he really have something of substance, and want to convince the people who think so highly of him. I am not taking sides in the Syrian Conflict, but would like to see politicians make pragmatic approaches to the issue in order to help facilitate a solution. Mr. Jumblat's stance unfortunately does not give that impression.

habal your protector is not falling, he is on the ground and very soon will be dead, Next will be hassouni and you

Democracy must privail in all arab world and towards building goverments away from religion so nobody can be above the law. however to reach this it is a very big giant step, regarding the ignorance of majority of people, so the best way to achieve this goal as first step must be in "education". If not doing that killing each other will not end.

Habal Amel, you know nothing about history. the USSR (not russia) supported the najibala of afghanistan for a decade with weapons and money and what have you. Google it and you would find out what happened to najibala. Russia can only prolong the problem and actually cause thousands more to die but the mathematical end is the same: bashar will be gone. In fact what russia is doing is horrbile news for hizbustan in the long term as this will definitly produce fundamentalist armed suni party in syria. What russia is stupidly doing is agitation of the suni-she3i war.

Christians on here need to learn from jumblat the art of politics. NO ONE will deport any christians or harm them or any bullshit as long as they stay on the right side of history and the demands of the people and not stupidly support a dying regime. Follow jumblat and learn how to switch sides, you can not endure by supporting 10 percent alawi against 80 percent sunis, it is mathematical suicide.