Pochettino's PSG 'Excited' for Barca Trip despite No Neymar 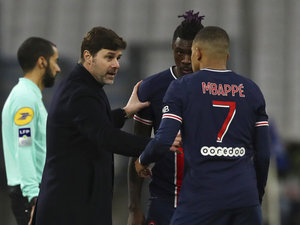 Paris Saint-Germain coach Mauricio Pochettino said on Monday his side remained "excited" for this week's Champions League last 16 first leg at Barcelona despite the absence of Neymar.

The world's most expensive player as well as fellow attacker Angel Di Maria will miss Tuesday's trip to the Camp Nou with injuries.

"You can see the excitement throughout the club, for PSG it is an obvious goal to win the Champions League and we understand the responsibility," said Pochettino, who took over from the sacked Thomas Tuchel in January, at his eve-of-match press conference.

"It is clear that absences like those of Neymar or Di María are significant, but we have a group of players who are eager to play this game and I am sure that whoever plays tomorrow will fulfill their role," he added.

PSG midfielder Marco Verratti is also a doubt for the game after missing the weekend's win over Nice with a hip problem.

"We go step by step, we will analyze Marco in today's training, which will not be demanding," said Pochettino.

The fixture is a re-run of Barca's 6-1 victory in 2017 after the Parisians, runners-up last season, won the first leg 4-0 at the Parc des Princes

"We really want to play and try to beat Barcelona, two teams who want to win the Champions League. But only one can."