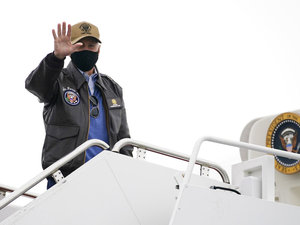 U.S. President Joe Biden is sidestepping a divided Congress and going straight to the nation Tuesday with a televised town hall in Wisconsin seeking support for his $1.9 trillion economic rescue package.

With lawmakers reeling from the aftermath of Donald Trump's impeachment acquittal, Biden is betting that he can escape the partisan standoff by addressing ordinary voters at the primetime CNN event in Milwaukee -- his first official trip away from Washington as president.

The White House said the live show will see Biden "take questions directly from the American people on issues they are facing every day, such as Covid and the economy."

Biden's stimulus package would more than double the previous measure passed by Congress, after intense debate, in December.

The administration says massive injections of money, including $1,400 checks sent to many Americans, are vital to preventing a sluggish economic recovery from stalling altogether.

Another major goal of the spending spree is to boost the Covid-19 vaccine rollout -- a logistical, medical and financial challenge upon which Biden's entire first term may hang.

But the stimulus bill's price tag, as well as some of the spending details, leaves most Republicans in Congress skeptical.

Apart from weekends at home in Delaware or the presidential retreat at Camp David, Biden's Air Force One flight Tuesday will be his first foray out of Washington since taking office a month ago.

Biden's choice of Wisconsin for the town hall is no coincidence: he won the battleground state by just 20,000 votes against Trump in November and it will feature prominently again in the 2022 midterms and 2024 presidential race.

On Thursday, he will go to another swing state when he tours the Pfizer plant in Kalamazoo, Michigan, where coronavirus vaccines are being manufactured.

On Friday, Biden will pursue his stimulus bill pitch on the international stage when he addresses the virtual G7 summit and the Munich Security Conference.

The White House says he will stress "the importance of all industrialized countries maintaining economic support for the recovery and collective measures to build back better."

With slim majorities in both the House and Senate, Democrats could force through Biden's package without Republicans at all.

But Biden took office insisting he would seek cross-party solutions, turning the page on Trump's ultra-divisive style. So he is keen to break through to at least some Republicans.

On Friday, Biden met in the Oval Office with a group of Democratic and Republican governors and mayors to discuss the Covid relief package. As local and regional officials most immediately caught up in the consequences of the twin health and economic crisis, they were a relatively receptive audience.

"You folks are all on the front lines and dealing with the crisis since day one," Biden noted.

His efforts seem to be paying off -- among voters at least, if not yet with congressional Republicans.

A Quinnipiac poll this month showed nearly 70 percent of Americans support the stimulus package, while a CNBC poll reported 64 percent believe the price tag is sufficient or not even enough. Only 36 percent said it was too much.