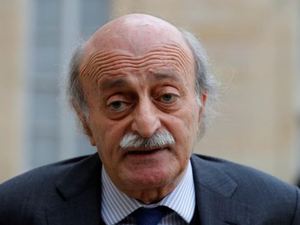 Progressive Socialist Party leader Walid Jumblat on Sunday voiced concerns that the appointment of a new investigation team into the Beirut port blast could be aimed at “wrapping up and burying” the probe.

“The main point in the issue of the port bombing and the resulting destruction and death is not probing how the blast happened, but rather unveiling the truth about who brought the ammonium nitrate shipment and who covered for its presence until the disaster occurred,” Jumblat tweeted.

“Is the new investigation team a Trojan horse aimed at wrapping up and burying the file?” Jumblat asked.

Lebanon on Friday named a new judge to lead the probe into the devastating blast, a day after his predecessor was removed from the case.

Tarek al-Bitar will become the second judge to look into the explosion of hundreds of tons of ammonium nitrate fertilizer on August 4 that killed more than 200 people, injured thousands and ravaged swathes of the capital.

Bitar steps into the position after a court on Thursday removed Judge Fadi Sawwan from the case, following a complaint from two former ministers charged with negligence over the explosion.

Lawyer and activist Nizar Saghieh tentatively welcomed Bitar's appointment, and said he had a good reputation as being competent.

But after Sawan's removal, he wondered whether the new judge would be able to conduct his work "without interference or pressure."

"Will he be able to cross the red lines?" he asked.

The probe into Lebanon's worst peace-time disaster has led to the detention of 25 people, from maintenance workers to the port's customs director, but not a single politician.

Well of course why else would they remove sawan