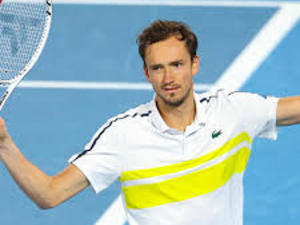 A flummoxed Daniil Medvedev said he was still looking for ways to short-circuit the Big Three "cyborgs of tennis" after his heavy defeat by Novak Djokovic in the Australian Open final on Sunday.

The Russian came into the decider on a 20-match winning streak but he ran into a brick wall in the world number one, who won 7-5, 6-2, 6-2 to claim his ninth Australian Open title and third in a row.

It left Medvedev, 25, a leading member of the next generation, wondering how to overcome Djokovic, Rafael Nadal and Roger Federer, who have 58 major titles between them.

"We're talking about some cyborgs of tennis, in a good way. They're just unbelievable," Medvedev said.

"I always say they're just better than other tennis players. I'm not shy to say this. It's just truth. In fact, in numbers and everything."

"That's why they have so many Slams," he added. "They're just really good."

Fourth-ranked Medvedev, who took Nadal to five sets in the 2019 US Open final, hoped he was inching closer to a breakthrough.

"I think I got closer because I always say experience is the key for me," he said.

"Next time if I play Novak ever here in the final, I for sure going to do some things on the court, maybe off the court also, differently."

But he said he had no chance of matching the careers of Nadal, Federer or Djokovic, the "king of Melbourne".

"To win nine Australian Opens, I need to win every year until I'm 34," he said.

"We still played like two hours or something, not that fast match. For me it felt like 30 minutes and I was there holding the finalist trophy."