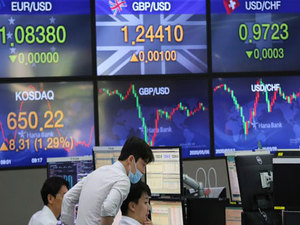 Markets mostly fell Monday as falling infection rates and more good news on the vaccine front were overshadowed by growing worries about high valuations and inflation.

While the United States is approaching 500,000 deaths, there is optimism that there is light at the end of the tunnel in the Covid-19 crisis as governments embark on immunisation programmes that will allow economies to reopen.

Expectations that President Joe Biden's vast stimulus will be passed next month are also keeping spirits up, as a raft of data last week on factory and services activity indicated the financial hit to the United States and Europe might not be as bad as feared.

News that the Pfizer/BioNTech jab appeared to prevent nine in 10 people from getting the disease in Israel -- which is the most advanced in its rollout -- provided a positive background. Israeli officials also said the shot was 99 percent effective at preventing deaths from the disease.

Meanwhile, hopes for a wider distribution were given a lift after Pfizer said its drug could be stored in normal medical freezers instead of the ultra-cold conditions initially thought necessary.

Shanghai and Hong Kong led losses, shedding more than one percent as the Chinese central bank sucked cash out of financial markets to ease bubble concerns. Sydney, Seoul, Wellington, Manila, Mumbai and Bangkok also fell, though there were gains in Tokyo, Singapore, Taipei and Jakarta.

London, Paris and Frankfurt all fell at the open.

The rally that has characterised the past few months looks to have come to a halt as traders fret that prices may have become a little too frothy.

There is growing concern that the expected recovery and Biden's spending package will fire a surge in inflation, which could force the Federal Reserve to wind back the loose monetary policies and record-low interest rates that have been a key pillar of a near-year-long market surge.

"The unprecedented and highly stimulatory policy is an attempt to exceed one million jobs a month from April to September.

"But timing is everything. The next leg of the reflation will have to be carried more and more by a continued recovery in economic growth... and all the while this will bring the Fed closer to acknowledge that policy normalisation is coming."

And Simon Ballard at First Abu Dhabi Bank warned that more big gains in stocks are "going to create increasing levels of concern".

He added: "It's driven by, on one side, stimulus expectations from Mr Biden and also the expectation of that continued dovish rhetoric and more acceptance of early stages of inflation from the Fed."

However, OANDA's Jeffrey Halley said Treasury yields were still below pre-Covid levels and that the rise to one-year highs was "no bad thing" as it showed the economy was improving.

Investors are keeping tabs on China-US relations after Biden called on European allies to stand up to political and economic challenges from Beijing.

On currency markets, the pound held gains above $1.40 -- its highest levels since April 2018 -- as the British government's vaccine drive continued to progress well and as Prime Minister Boris Johnson laid out a plan for easing an economically painful virus lockdown.

Bitcoin eased to $57,150, having hit another record high of $58,350 over the weekend, and having passed $1 trillion in market capitalisation.

And oil prices bounced after being sold at the end of last week on profit-taking -- having hit a 13-month high -- and as US energy firms slowly restarted operations in Texas that had been hammered by a severe cold snap.