Inter on Top, Bayern, Atletico and PSG All Stumble 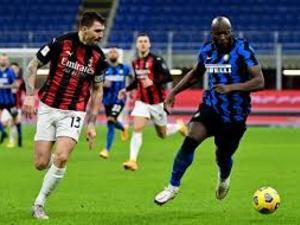 Inter's victory in the Milan derby leaves them in a strong position in Serie A, while title races are alive around Europe after defeats for Bayern Munich, Atletico Madrid and Paris Saint-Germain at the weekend.

AFP Sport rounds up some of the main talking points from across the continent:

- Advantage Inter in Serie A -

Inter took a potentially huge step towards a first Scudetto since 2010 by crushing AC Milan 3-0 in the "Derby della Madonnina". Romelu Lukaku came out on top in his personal battle with Zlatan Ibrahimovic, the Belgian setting up one of two goals scored by Lautaro Martinez and then scoring a superb final goal, his 17th of the season in Serie A.

Antonio Conte's Inter are four points clear of second-placed Milan, for whom this was a second straight loss. It is now another five points back to Roma in third, while reigning champions Juventus are currently sixth.

Inter have now won six of the last seven Milan derbies, the only exception being a 2-1 defeat in the first meeting of this season, in October.

Bayern have looked jaded since returning from winning the Club World Cup in Qatar. The reigning European champions had to come from two goals down to draw 3-3 at home to Arminia Bielefeld last Monday and followed that by losing 2-1 at Eintracht Frankfurt on Saturday, despite Robert Lewandowski's 26th Bundesliga goal this season.

Bayern are now just two points clear at the top from RB Leipzig, who won 3-0 at Hertha Berlin. The teams meet in Leipzig in early April. For now, though, Hansi Flick's side return to Champions League action as they go to Lazio in the first leg of their last-16 tie on Tuesday.

It has been a great week for Borussia Dortmund and a superb few days for Erling Braut Haaland. The Norwegian sensation's double helped his side beat Sevilla 3-2 in Spain in their Champions League last 16, first leg and he followed that with a brace in Dortmund's crushing 4-0 win at Schalke in a one-sided Ruhr derby.

Haaland's first goal was stunning, the 20-year-old leaping to meet Jadon Sancho's cross and acrobatically volleying into the net. He has 17 in 17 in the Bundesliga this season, and 27 in all competitions.

Dortmund are still sixth in the Bundesliga but their relative struggles are nothing compared to those of Schalke, who have now lost the last three derbies by a combined score of 11-0. The Royal Blues have won just one league game all season and remain nine points from safety.

Atletico had seemingly been on a relentless charge towards a first Spanish title since 2014 before two meetings in four days with Levante. After a 1-1 draw in Valencia on Wednesday, Diego Simeone's side lost 2-0 to the same opponents to suffer their first home loss in La Liga since December 2019 and their first at home to a team other than Barcelona or Real Madrid since May 2018.

They are now just three points clear of Real, albeit with a game in hand. Madrid won 1-0 at Valladolid. Next up for Atletico is Chelsea in the Champions League.

Meanwhile Barcelona suffered a hangover from their Champions League loss to PSG, conceding an 89th-minute penalty to draw 1-1 with Cadiz after Lionel Messi had earlier scored a spot-kick for his 21st goal this season. Ronald Koeman's team are eight points behind Atletico.

- PSG up against it in competitive Ligue 1 -

Not so long ago, PSG's crushing dominance in Ligue 1 was seen as an explanation for their inability to win big games in Europe. How times have changed. Following their 4-1 win in Barcelona, inspired by Kylian Mbappe's hat-trick, PSG suffered their sixth Ligue 1 loss this season, going down 2-0 at home to Monaco.

Mbappe had scored seven times in seven previous meetings with his old club but was kept quiet as Monaco beat PSG for the second time this season to keep the French title race wide open.

With two-thirds of the season gone, six points separate the top four. Lille's 4-1 win at Lorient means they are three points ahead of Lyon, winners at Brest, and four above PSG in third. Monaco, in fourth, are another two points back.