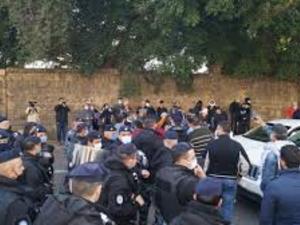 Anti-government protesters on Monday rallied outside the Military Court in Beirut and blocked the road in both directions, demanding the release of detainees held over the recent violent protests in Tripoli.

In a speech at the site, the protesters rejected military trials for “those who rebelled against authorities’ corruption, the difficult living situations and the current collapse,” demanding the immediate release of the detainees.

“Some of them are detained and some had been released,” it added.

The recent demos in Tripoli erupted over dire economic conditions aggravated by a strict Covid-19 lockdown. The protests quickly turned violent and involved the torching of the city’s municipal building and attacks on the main government building, known as the Serail, which according to security forces involved the use of several military-grade hand grenades.

Not defending what happened in Tripoli, but to charge them with Terrorism is a joke! However, when an armed militia invades Beirut (like on May 7th), kills and wreaks havoc, nothing is done. Eventually, we are heading for another civil war.

When the Shia shoot and kill army soldiers, they are not charged with even bad behaviour:)

This is 'resistance' in its purest form:)

Often quality is more important than quantity, unfortunately in politics quantity matters. The feudal/religion system in Lebanon , succeeded to keep the population divided, therefore demonstrations and uprisings seldom involved all the population, only in 2005 when the cedar revolution took place, the Lebanese could get rid of the Syrian regime. Unfortunately the Lebanese population is brainwashed to be willingly divided, demonstrations or objections remain on small community level and not united for nation wide uprising. Of course the warlords whether they are in the government or in the opposition they will keep it this way. Divide and rule that's their strategy.

But this is not terrorism!