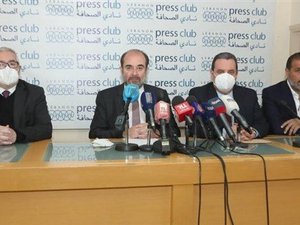 The petition is signed by the LF’s 15 lawmakers and addressed to U.N. Secretary General Antonio Guterres.

The moves comes due to “people’s lack of trust in the local investigation and in its ability to unveil the truth,” the LF said in a statement, citing “the current obstacles” that the probe is facing.

“Truth, justice and compensations are three objectives that the entire Lebanese people will not rest before achieving them,” MP George Okais said at a press conference that followed the meeting with the U.N. official.

Noting that Lebanese state institutions are nearing “a state of complete disintegration,” seeing as “the government is yet to be formed, the judiciary is not independent and parliament is missing several members,” Okais said the LF could not “stand idly by towards the plight of the victims’ families.”

He added that should it be formed, the U.N. panel of inquiry would “collect facts and evidence and put them at the disposal of both the U.N. general secretariat and the Lebanese judiciary.”

“We sensed from the U.N. representative full appreciation for (the petition’s) content… and she repeated to us the U.N.’s demand of a neutral, independent, transparent and quick probe that would lead the families of the victims to the truth,” Okais added.