NATO Will Not Return to Libya despite Clashes 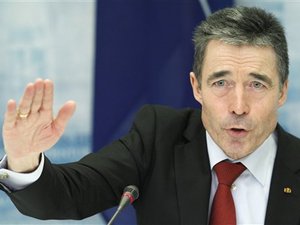 NATO has no intention of launching new air operations in Libya despite deadly clashes taking place in a former bastion of late dictator Moammar Gadhafi, the alliance chief said Thursday.

Fighting erupted in the oasis town of Bani Walid earlier this week, three months after NATO ended its air war in Libya and declared it had accomplished its mission to protect the civilian population.

"We are not present in Libya and we have no intention to return," Secretary General Anders Fogh Rasmussen told a news conference.

Rasmussen noted that the U.N. mandate that authorized the operation was no longer active.

"On October 31 we terminated the operation because we clearly assessed that we had done our job and done it successfully," he said. "This is also the reason why we have no intention to return. Our mission has been completed."