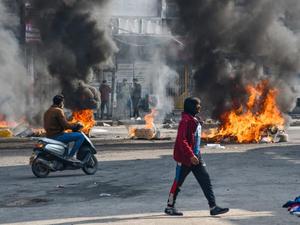 A young man was shot dead on Monday during a protest in the capital of Iraq's southern Dhi Qar province over poor public services, a local medical source told AFP.

Dozens of demonstrators had gathered in front of the governorate to demand the dismissal of governor Nazem al-Waeli over a deterioration in public services, an AFP correspondent in the provincial capital of Nasiriyah said.

They set tires alight and threw stones at the administrative building, before security forces arrived and used both tear gas and live fire to break up the demonstration.

"A demonstrator who was under 20 years old was shot dead," the medical source in Nasiriyah told AFP, saying another four protesters and 12 security forces were wounded.

Dhi Qar authorities announced a strict curfew in all major cities across the province to prevent further rallies.

Many households have only a few hours of state-provided electricity per day or complain of polluted tap water, and the resulting anger has erupted into protests in the past.

In late 2019, public frustration over poor services, unemployment and corruption morphed into an unprecedented anti-government movement across southern Iraq as well as the capital Baghdad.

Nearly 600 people have been killed in protest-related violence since then, including in mass violence at demonstrations but also in targeted assassinations of activists.

Among them are more than a dozen security forces.

In January, a policeman was shot dead and dozens more people wounded during a rally in Nasiriyah, which has long been a hotspot of protests.