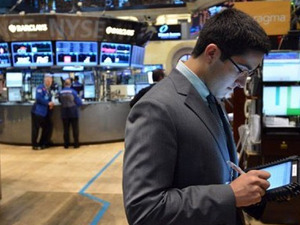 Even though the United States has reported almost 500,000 Covid deaths, optimism is rising as governments pursue immunization programs that should allow economies to recover.

British Prime Minister Boris Johnson laid out a four-step plan to ease coronavirus restrictions Monday, and expressed hope that life could get back to normal by the end of June.

In Germany, a survey showed that business confidence has improved this month, with the robust industrial sector of Europe's top economy withstanding the impact of coronavirus restrictions.

The Ifo institute's monthly confidence barometer, based on a survey of 9,000 companies, climbed to 92.4 points from 90.3 points in January, when tougher measures to fight the pandemic were introduced.

But European stock markets "have kicked off the week on a somewhat unstable footing, with the fears over rising inflation and (U.S.) Treasury yields once again dampening sentiment on a day that had promised to be dominated by reopening hopes", noted Joshua Mahony, senior market analyst at the IG trading group.

The pound held gains above $1.40 -- reaching its highest levels since April 2018 -- as the British vaccine drive moved forward.

Bitcoin fell to below $54,000, having hit another record high of $58,350 and passing $1 trillion in market capitalisation.

The stock market rally that has characterized the past few months looks to have run out of steam as traders worry that prices might have risen too far.

Concern is also growing that an expected recovery and US stimulus package will fuel a surge in inflation, and that the Federal Reserve would then crank up record-low interest rates.

On the political front, investors are keeping tabs on China-US relations after President Joe Biden urged European allies to stand up to political and economic challenges from Beijing.