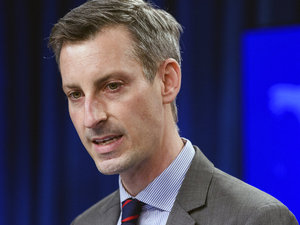 The United States on Monday urged Iran to comply "fully" with verification of its nuclear program, voicing concern about a temporary arrangement worked out with the International Atomic Energy Agency.

State Department spokesman Ned Price praised the "professionalism" of IAEA chief Rafael Grossi on his visit to Tehran, "while also reiterating the call on Iran to fully meet its verification and other nuclear non-proliferation commitments."

"We are of course concerned to hear that Iran intends to cease implementation of the additional protocol and other measures this week," Price told reporters.

Grossi visited Tehran on the Iranian parliament's deadline to stop compliance with the so-called additional protocol on IAEA inspections of its nuclear sites unless the United States lifts sanctions imposed by former president Donald Trump.

The trip came after US President Joe Biden last week offered to talk to Iran under the aegis of the European Union in an effort to revive the nuclear deal, known formally as the Joint Comprehensive Plan of Action, that was rejected by Trump.

Price downplayed Supreme Leader Ayatollah Ali Khamenei's warning that Iran could go up to 60 percent uranium enrichment -- well above the current level, but still below what is needed to build an atomic bomb.

"We are of course concerned that Iran has over time moved away from its commitments under the JCPOA. This of course started long before this administration," Price told reporters when asked about Khamenei's comments.

"There is now a proposition on the table," Price said. "If Iran returns to full compliance, we will be prepared to do the same."

"We certainly hope the Iranians will be willing to be there."