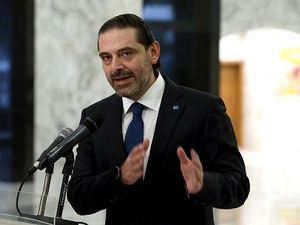 Prominent political sides will seek to convince PM-designate Saad Hariri to accept a government of 22 or 24 ministers in which no single party would have a one-third-plus-one share, media reports said on Tuesday.

The Free Patriotic Movement’s OTV meanwhile quoted Baabda Palace sources as saying that Hariri has agreed to the formation of a 22-seat government in which President Michel Aoun would get six ministers and MP Talal Arslan would get the second Druze seat, which would prevent anyone from obtaining the one-third-plus-one share.

Sources close to Hariri have however denied the reports, describing them as “mere wishes or analyses that are totally distant from reality.”

The VIPs got their shots... are you surprised Noubi?

the following is from the above article:
"Prominent political sides will seek to convince PM-designate Saad Hariri to accept a government of 22 or 24 ministers in which no single party would have a one-third-plus-one share, media reports said on Tuesday."
reading this I conclude that the objective is to create a government working for the political parties and not for Lebanon.

Kazan, this is the trap Lebanese should avoid. Cedar Revolution I was successful in kicking Assad's forces out without firing a shot or vandalizing any store because over one million ordinary Lebanese (silent majority) demonstrated with a common theme despite Assad's many Lebanese politician agents. CRI failed once political parties misappropriated its slogans. The spring is coming and Covid is being contained worldwide. Thawra should stop all minor demonstrations until the spring or summer for one massive demonstration “CR II” along Batrak positive neutrality theme and no arms outside army. By then Thawra should developed a comprehensive reformist-political-economic-social plan and initiated high-level contacts with major countries and organizations as well as world bank in preparation for next election, Lebanon only path to salvation and restoring its resala.

Considering intimidation and threats, Thawra must organize the Lebanese diaspora, thousands of us who live in free countries. Then not a day is to be wasted as the task is huge for:
1. Developing a comprehensive reformist-political-economic-social plan and how to join the world digital economy by investing in giga internet throughout Lebanon to link every remote village to worldwide corporations. Setting process for transparent government by making all public records and all permits and government processes on-line without the need for samasira.
2. Planning for the a peaceful Cedar Revolution II day throughout Lebanon.
3. Preparing for next elections by selecting honest and competent women and men to represent the Thawra for every seat, wz clear plan to implement Thawra program & milestones to be achieved.
Once Lebanese are offered to vote for a vetted plan supported by international organizations & Lebanese entrepreneurs instead of zuamaa, their choice should be easy.

Gebran, I sincerely hope for the Lebanese of all communities that the rational will win over the emotion, and the love for their children will win over the hatred of their enemy, then we are talking about wisdom and maturity, the scars of the civil war should have healed by now. in the past years I visited Lebanon 3 times, a lot of good people with genuine intentions and good initiatives didn't have a chance to move forward due to lack of nation wide support, obviously the feudal system is the serious obstacle.

"Prominent political sides will seek to convince PM-designate Saad Hariri to accept a government of 22 or 24 ministers"
This I don't understand. Hariri was tasked with forming a government. According to the law he consulted with President Aoun. So why are other people interfering with his task of the formation of his aim of a 16 member technocrat cabinet with no politicians?