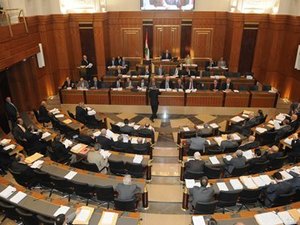 The World Bank threatened Tuesday to suspend financing for coronavirus vaccines in Lebanon over what it said were suspected violations by lawmakers who were inoculated in parliament.

Such a move by the World Bank would have grave consequences as Lebanon struggles through severe financial and economic crises and is in desperate need of aid. The World Bank said last month it approved $34 million to help pay for vaccines for Lebanon that will inoculate over 2 million people. The vaccination campaign in the country began on Feb. 14 and Lebanon has so far received nearly 60,000 shots of Pfizer-BioNTech.

"Everyone has to register and wait for their turn! #nowasta," the World Bank's regional director Saroj Kumar Jha tweeted, using a Lebanese term meaning that there should not be nepotism.

The World Bank "may suspend financing for vaccines and support for COVID19 response across Lebanon!!" he warned. "I appeal to all, I mean all, regardless of your position, to please register and wait for your turn."

He added that the vaccination "is not in line with the national plan agreed with @WorldBank and we would record it (as a) breach of terms and conditions agreed with us for fair and equitable vaccination."

Lebanon is notorious for corruption and nepotism, which has brought the Mediterranean nation to bankruptcy.

Abdul Rahman Bizri, who heads the committee supervising the vaccination campaign, held a news conference later Tuesday in which he announced that he backed down from a decision to submit his resignation and that he has called the committee's members for a meeting on Wednesday to "discuss the reasons and justifications" for the controversial vaccination of the 16 MPs.

"What happened today was a breach of the vaccination process over which we cannot remain silent," he added.

"What happened today is outrageous and should not be repeated," Bizri said. "There is no political priority."

Bizri said that before he held the news conference he discussed the matter with the regional director of the World Bank.

Parliament's secretary general Adnan Daher was quoted by state media denying that the 16 legislators had jumped the line, which prioritizes medical workers and residents at least 75 years old. Daher said all of the legislators who received in inoculation had registered and were properly in line.

MP Michel Moussa later clarified that he had received the vaccine days ago "as a physician who is registered (on the platform) via the Order of Physicians and after the approval of the Health Ministry."

The World Bank and the International Federation of the Red Cross and Red Crescent Societies have signed an agreement for independent monitoring of Lebanon's coronavirus vaccination campaign.

"There were many violations that took place at vaccination centers," said Sharaf Abu Sharaf, president of Lebanese Order of Physicians. He added in a statement that violations included vaccinating people who were not registered or not included in the first phase of the campaign.

News that MPs had received their injections sparked anger on social media, in a country with a long reputation for government corruption.

"My mom is 84 she is registered and didn't (have) her turn yet, while all the politicians, (their) families and friends will be vaccinated before her," said one Twitter user.

Lebanon, a country of six million people including a million Syrian refugees, has registered more than 356,000 coronavirus cases and 4,387 deaths since the first case was registered in February last year.

Dr Bizri is a really first class top doctor. It’ll be a great loss if he resigned. Nothing can be done at his level to prevent the corrupt ruling class from getting vaccinated before the sick and elderly.

In a respectable democracy, the MPs and other politicians who got caught red handed in such a scandal would resign .... and they’d even get ejected from their political party.

You see Nabih Berri resigning? He is the very reason we have pfizer first because his doctor advised him to take that vaccine sinvpce his dna is etched in stone and will not decay.

Lebanon is notorious for corruption and nepotism, which has brought the Mediterranean nation to bankruptcy.
Lebanon is notorious, on the contrary, for giving Christians half the seats in the parliament while their numbers in society are a quarter or third of the whole. Patriarch al Rahi calls this "equality". Shias, who make up the majority, thus reject the government's legitimacy. It is probably true that the only functional government in Lebanon is provided by the Shia party Hezbullah.

this remark is misplaced, these thoughts and this behavior should stop if you hope for better future for you and your children

Chrisrushlau. You keep on and on for years with your hate posts about christians. Where would Lebanese moslems be without christians?

The golden age of lebanon was when christians governed. We were nbr one in the arab world. Today hezbollahan berri and (shia) aoun are gouverning us and we are nbr 12. Still have yemen (huthi) and syria(assad behind us.

All this because of trolls like you. Go crawl back under a rock with your anti christian constant hate speech.

Giving the Christians half the seats in Parliament has never been a problem. Christians in general are Lebanese, but you Shias are Iranian.