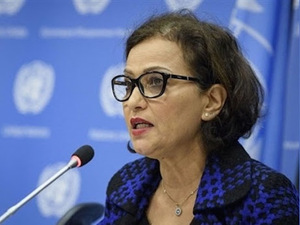 Najat Rochdi, the Officer in Charge of the Office of the U.N. Special Coordinator for Lebanon and Resident and Humanitarian Coordinator for Lebanon, met Monday with Maronite Patriarch Beshara al-Rahi and discussed with him the latest developments in Lebanon, including the deepening socio-economic crisis and its impact on the Lebanese people, her office said on Tuesday.

"Ms. Rochdi listened to Patriarch Rahi's proposal and views on holding an international conference for Lebanon," the office said in a statement.

Rochdi reiterated the U.N.'s "longstanding and continuous support for Lebanon, in cooperation with other international partners, including through humanitarian, recovery and reconstruction assistance following last year’s tragic Beirut Port explosion, during the COVID19 health emergency and during the grave economic and social crisis," the office added.

"This support was reaffirmed at the 2 December international conference co-chaired by France and the UN to support the Lebanese people," it said.

It added: "The U.N. hopes that Lebanon's leaders will prioritize Lebanon's national interest and rapidly overcome their differences to form a new government that addresses the country's numerous challenges, meets the aspirations of the Lebanese people and implements necessary reforms."

Rochdi cautioned against removing Christian privilege in Lebanon enshrined in Article 24 of the Constitution which reserves half the seats in the parliament to Christians who number a quarter or third of the whole. She said, "If we lose racism in Lebanon, Israel could be next. That would be the end of European imperialism and the world order dependent upon it."