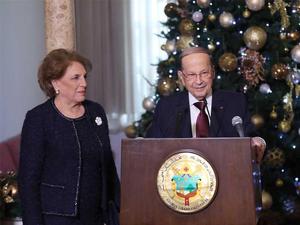 The Presidency on Tuesday confirmed that President Michel Aoun, First Lady Nadia Aoun and ten of the president’s close associates have been vaccinated against Covid-19, amid controversy over the vaccination of 16 MPs who were accused of bypassing the country’s official inoculation platform that is aimed at ensuring a fair rollout of the vaccine.

The Presidency’s statement came shortly after al-Jadeed TV reported that “a medical team headed to the presidential palace on Friday, where they vaccinated the president, his wife and 16 members of his team.”

The Presidency’s statement said the ten associates had “registered their names on the vaccination platform according to the applicable procedures.”

“On this occasion, President Aoun calls on the Lebanese to register their names on the platform to receive the vaccination and contribute to combating the spread of this pandemic,” the statement added.

It also noted that “coronavirus infections had been previously recorded among the ranks of the team that works directly with the president.”

Earlier in the day, the World Bank, which is helping fund the vaccine rollout, said the vaccination of the 16 MPs broke the terms of the agreement with the government.

"We would record it (as a) breach of terms and conditions agreed with us for fair and equitable vaccination," World Bank regional director Saroj Kumar Jha said on Twitter.

"Everyone has to register and wait for their turn," he added.

"Upon confirmation of (a) violation, (the) World Bank may suspend financing for vaccines and support for Covid-19 response across Lebanon," Jha added on Twitter.

News that MPs had received their injections sparked anger on social media, in a country with a long reputation for government corruption.

"My mom is 84 she is registered and didn't (have) her turn yet, while all the politicians, (their) families and friends will be vaccinated before her," said one Twitter user.

We wouldn’t expect less from such malefactors.

How old is the Syrian First Lady Nadia el shami?

How old are their aids? 80+ ? Somehow I believe the Aoun daughters and their partners are the “aids”.

Every time I look at this guy, his wife, his daughters, and his son in law, I hate Hariri more and more.

They get caught by al-Jadeed TV so they put a Salim Jreissati cynical spin on it.

He and his family are the political virus that has destroyed Lebanon; and for this there his no vaccine.