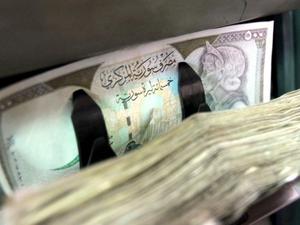 Syria's pound hit a new low against the dollar on the black market Tuesday, a foreign exchange website and currency traders said, in the latest blow to the war-battered economy.

The exchange rate reached 4,000 Syrian pounds to the U.S. dollar for the first time since the start of the conflict a decade ago, traders told AFP by phone.

"There's a huge scarcity of dollars on the market," one trader said.

Syria's economy has been battered by 10 years of war, and is reeling from the knock-on effects of a financial crisis in neighboring Lebanon that has stemmed the flow of dollars into government-held areas.

The website showed the dollar was selling for 4,000 Syrian pounds in Damascus, while it hovered around 3,900 in other parts of the country.

Lebanon's pound too reached an all-time low on the black market Tuesday, trading at almost 10,000 to the dollar.

Syria's official exchange rate has stood at around 1,250 pounds to the greenback since June -- compared to 47 pounds to the dollar before the war.

The new unofficial rate means the currency is now worth almost 99 percent less on the black market than the official rate before the war.

The United Nations says 60 percent of the population now struggles to find enough food each day, with food prices 33 times higher than before the conflict.

The Damascus government has blamed the economic crisis on Western sanctions and the crisis in Lebanon.

Analyst Zaki Mehchy said the Lebanese economic crisis was "one of the main reasons" for the recent change to the Syrian unofficial exchange rate.

"What's happening in Lebanon is affecting the Syrian pound because Lebanon is one of the main channels for the Syrian government to the external market," he said.

Another factor was likely the introduction of a new 5,000 Syrian pound banknote, which went into circulation without being covered by hard currency or an increase in economic activity, the senior consulting fellow at the London-based Chatham House think tank said.

Syria's war has killed more than 387,000 people, ravaged key infrastructure and displaced millions since it started in 2011 with the repression on anti-government protests.

Wherever there is Iranian interference, the local economy is in shambles: Lebanon, Syria, Iraq and Yemen not to mention Iran itself.

The only proper way of governing is PRAGMATISM. Not nasizm not fascism, not communism, not islamism, not terrorism, not assadism, etc....

A study over 200 years found the most successful governments are those who concentrate on creating jobs and attracting investors. Not on following any ideology.