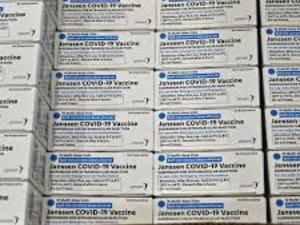 Biden "will announce an unprecedented historic step" later Tuesday afternoon, White House spokeswoman Jen Psaki said, as part of the administration efforts to contain a virus that has claimed more than 500,000 U.S. lives.

"The two largest healthcare and pharmaceutical companies Merck and Johnson and Johnson, usually competitors, are coming together to expand production of the vaccine," Psaki told reporters.

The J&J vaccine is the third to receive U.S. regulatory approval for emergency use, but the first that requires a single shot as opposed to two jabs.

Merck will dedicate two facilities in the United States to the J&J vaccine build-out, one to manufacture the vaccine and the other to conclude the production process by putting the substance in vials and packing it for shipment, according to a report in the Washington Post.

Neither Merck nor J&J immediately responded to a request for comment.

The Food and Drug Administration's greenlighting of the J&J vaccine follows December provisional approvals of those by Pfizer and Moderna.

The J&J shot appears less protective than Pfizer and Moderna's regimes, which have an efficacy of around 95 percent against all forms of Covid-19. But all three have been shown to fully protect against hospitalizations and death.

J&J has said it aims to deliver 20 million doses by the end of March, with 100 million by June -- though the US is pushing to expedite that timeline.

During a visit to a Pfizer vaccine manufacturing facility in Michigan last month, Biden said 600 million doses -- enough to cover most of the country -- were expected to be ready by the end of July.

A major vaccine producer in its own right, Merck had begun work on coronavirus vaccines, but abandoned those efforts in January, saying the immune responses that were "inferior" to successful Covid-19 vaccines.

The agreement between Merck and J&J follows on the heels of an accord between Pfizer/BioNTech and French pharma giant Sanofi, which plans to produce 125 million doses at a factory in Frankfurt, Germany after Sanofi's own vaccine candidate fell short.