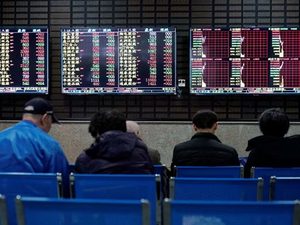 Asian markets rose Wednesday following the previous day's losses but investors remain on guard over a possible correction as concerns about asset bubbles and a surge in inflation continue to play against progress in fighting coronavirus.

News of more vaccines coming on line and being rolled out, the expected passage of Joe Biden's stimulus package, slowing infection rates and easing lockdowns are contributing to the narrative that the global economy will see a burst of activity from the second half of the year.

But reflation expectations are causing a headache for investors, who fear the spending boom will send prices rocketing and force the Federal Reserve to hike interest rates -- removing a key pillar of support for equities over the past year.

And this anxiety, compounded by a 12-month rally that has pushed equities to record or multi-year highs, has jolted markets recently.

Last week's sell-off came on the back of rising US Treasury yields, an indication of rising interest rates, and while the bond market has steadied this week traders remain cautious.

Hopes for a quick bounce back were boosted Tuesday when the White House said it would have enough shots to immunise every adult by the end of May, two months earlier than first thought.

But "so are the market's inflation expectations", said Axi strategist Stephen Innes. "And despite vaccine optimism trying to provide a booster shot to risk sentiment, it could prove to be a double-edged sword when inflation kicks in as expected, more so if it then forces the Fed's hand."

And Katerina Simonetti at Morgan Stanley Private Wealth Management added: "We believe we're still very much in a bull market, but certain pullbacks like the one we've seen since the beginning of this year are very natural and sometimes needed.

"If interest rates start moving higher and quicker than expected, then there's a chance there might be more significant pullback in the market," she told Bloomberg TV.

Sydney was given extra support from data showing the Australian economy grew more than expected towards the end of last year.

"The noise continues in financial markets, which are wasting a lot of energy vacillating between global recovery hopes and asset bubble fears this week," said OANDA's Jeffrey Halley. "The US bond tantrum has introduced some long-overdue two-way price action into the nearly one-year unidirectional buy-everything rally.

"That state of affairs is likely to continue as markets learn to live with the prospect of higher interest rates and steeper yield curves, driven by the higher input price side of the global recovery equation."

While trading floors worry about the prospect of rising borrowing costs, Fed officials continue to try to soothe concerns.

The latest was governor Lael Brainard, who said it would take "some time" for the central bank's inflation and employment conditions to be met and push it to rethink its ultra-loose monetary policy.

"Even after the conditions for liftoff have been met, changes in that policy rate are likely to be only gradual," she told the Council on Foreign Relations think-tank. A surge in inflation would likely be transitory rather than long-term, she added.