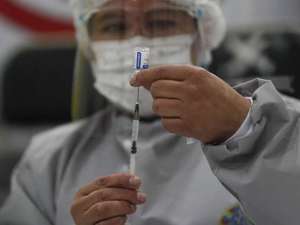 Russia said Thursday it will be able to provide its Sputnik V coronavirus vaccine for 50 million Europeans from June if it is approved by the European Medicines Agency.

The European Union's drug watchdog earlier Thursday said it had started a "rolling review" of Sputnik V, which represented a key step towards approval for the vaccine's use across the 27-nation European Union.

"Following EMA approval, we would be able to provide vaccines for 50 million Europeans starting from June 2021," Kirill Dmitriyev, the head of the Russian Direct Investment Fund (RDIF), which developed Sputnik, said in a statement.

The EMA's announcement that it had begun a review of the Russian vaccine came as Brussels faces criticism for a slow start to its mass vaccination rollout after it was held back by supply problems.

The announcement was also a step closer to a win for Moscow, which hopes to gain geopolitical influence through the vaccine.

Several of the EU's member states, including Germany and Spain, have said in recent weeks they would be interested in Sputnik V if it was approved, while Hungary registered it on its own.

Brussels has been wary of Sputnik V -- named after the Soviet-era satellite -- over concerns the Kremlin would use it as a soft power tool.

Russia approved the jab last August before large-scale clinical trials, sparking concern among some experts at home and abroad over the fast-track process.

But leading medical journal The Lancet last month published results showing the jab was safe and over 90 percent effective.

The RDIF, which helped finance the development of Sputnik V, said Thursday that 42 countries have registered the vaccine.

Last week the Kremlin said that Russia and Austria had agreed to talks over the delivery and joint production of Sputnik V.